One Alzheimer’s drug fails, but many others in testing 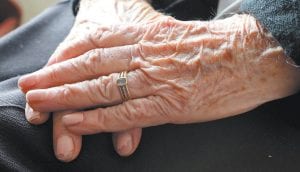 A drug that researchers hoped would help to slow down Alzheimer’s disease appears to have failed. (AP Photo)

Another major Alzheimer’s drug study has failed, leaving patients and families wondering if there ever will be a treatment to slow or reverse the most common form of dementia, which afflicts more than 5 million in the United States alone.

Eli Lilly & Co. said solanezumab (sol-ah-NAYZ-uhmab) failed to slow mental decline in people with mild Alzheimer’s. The drug is still being tried in two other studies, and at least 18 other drugs are in late-stage testing, including several similar to solanezumab. Dietary therapies, supplements and even a medical device also are being tried.

“ There are other approaches that we need to pursue. We need to redouble our efforts,” said Maria Carrillo, chief science officer of the Alzheimer’s Association.

Some things being tried: STARTING EARLIER

Solanezumab was tested in people with mild dementia after two previous trials showed it did not help those further along, with moderate Alzheimer’s. Many doctors think even the mild stage is too late to try to reverse neurological damage.

The news “strengthens my belief that we should be trying this before people have symptoms,” said Dr. Reisa Sperling, a neurologist at Brigham and Women’s Hospital in Boston.

She is testing whether solanezumab can prevent development of dementia in people with no symptoms but sticky deposits of a substance called amyloid, which forms plaques in the brains of Alzheimer’s patients. More than 800 out of the intended 1,150 participants have been enrolled, and she’s rethinking whether that’s enough. The National Institutes of Health and Lilly are funding the research. OTHER DRUGS

Solanezumab binds to amyloid, helping the body to get rid of it.

Three other experimental drugs aim earlier in the process. They target BACE, an enzyme involved in producing amyloid. Lilly and AstraZeneca have partnered on one BACE inhibitor; others are being developed by Merck & Co. and by Eisai Inc. with Biogen.

Another late-stage study tests a drug aimed at tau, the other protein thought to play a key role in Alzheimer’s besides amyloid. Results are expected at a medical conference next month. BEYOND TRADITIONAL ALZHEIMER’S DRUGS

A large study is testing the blood pressure drug nilvadipine. Yet another is trying a nose spray version of insulin, which some earlier work suggested shows promise.

Finally, doctors are testing a device, sort of a pacemaker for the brain. It delivers transcranial magnetic stimulation to stimulate specific regions that appear affected by dementia.