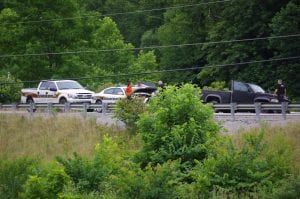 A pursuit that involved police from two counties ended about 2:30 p.m. today just across the Harlan County line at Blair, after two of the pickup’s tires were deflated when it ran over spike strips.
The chase involved Kentucky State Police, the Letcher County Sheriff’s Department, Whitesburg Police, Cumberland Police, Harlan Police, and the Harlan County Sheriff’s Department. Speeds ranged from 30 to 70 miles per hour, and led police along KY 15, through downtown Whitesburg, and down US 119 South.
The chase began in Harlan County after the black pickup truck fled the scene of a crash. It crossed Pine Mountain twice before the chase ended just outside Cumberland.
It passed through downtown Whitesburg at low speed with nine police cars trailing it.