ONE BRICK AT A TIME 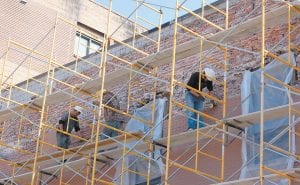 ONE BRICK AT A TIME — Workers from Johnson’s Masonry of Grapevine removed the outer layer of bricks from a side of the Whitaker Bank building in downtown Whitesburg Nov. 2. Some of the bricks were buckled and broken and needed to be replaced. By removing the bricks, the workers revealed an inner layer of old bricks, which will soon be covered up again by new bricks. Paul Adams, president of Whitaker Bank, said the project should be completed by the end of the week. (Photo by Sally Barto)