One can overcome, the Charles Reed story 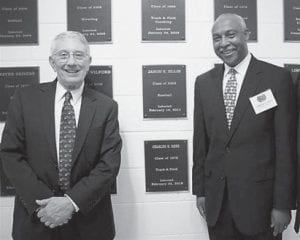 When I think of success I think of the people I have known who overcame hardships and beat the odds of ever becoming successful. Several of my former students have become successful doctors, lawyers, educators and businessmen or women. They did not necessarily defy the odds because in many cases they were expected to succeed; they had the advantages of being from affluent and supportive families and in many cases were able to attend the better schools.

Charles Reed, formerly of McRoberts, was not expected to become a college graduate, a hall of fame athlete or a successful businessman but he defied the odds. Charles grew up poor, he was a minority and he attended a segregated grade school in McRoberts. When the schools were integrated in the 1964- 1965 school year, he attended McRoberts Middle School and later Jenkins High School. He graduated in 1970. He lived in Tom Biggs where all of the ‘colored folks’ lived during that era.

At an early age Charles’s athletic prowess was evident and he learned early in life that that distinction can make you a target for bigoted fans and other athletes. At a grade school basketball game where Charles was the star player, he was assaulted by a fan of the opposing team as he was leaving the court after the game.

I got to know Charles in the classroom when he was one of my students and when I was his B-team basketball coach and track coach. I saw his raw talent and determination, which grew each year. It was obvious that he was something special. He was the kind of person who exhibited his talent and character and gained the respect of his teammates, coaches and opponents.

As Charles’s B-team basketball coach I was called at home before a ball game. The Jenkins police stated that they had one of my ball players in jail. I rushed to city hall to see what was going on. He was not in jail, but they had him sitting in the police office. When I inquired about what had led up to this, Charles said that he went for a hamburger at a local restaurant and they wouldn’t serve him. He had marched back and forth in front of the restaurant to protest this blatant case of discrimination. After I served as mediator between Charles and the police they let him go so he could play in the ball game.

In another incident the Jenkins track team went for an away meet and when they stopped to eat the restaurant would not serve the black athletes. No one ate that night for the team was loaded up on the bus and returned home to Jenkins. Charles and other black students were resentful of such incidents. It would take many years for the white community to accept the Civil Rights Act.

The Jenkins Jaycees were an active club during that era and one of the many positive things it did for the community was sponsor a track meet in Bowling Green for two summers in a row. This was great for the Jenkins track team because it allowed for additional practice during the summer. I would take the old school carryall vehicle and pick up the boys at their homes and return them after a couple hours of practice. These additional practices during the summer gave us a tremendous advantage during the regular school year.

The old carryall that I drove did not have good brakes because of a brake fluid leak. One day when we were coming down Lakeside Drive near the present water plant, the brakes went out completely. The farther we came down the hill, the faster the vehicle traveled. As we approached the intersection of Main Street I knew we were in trouble. Steve Narramore was one of the passengers and had a loud voice. I told him to yell for everyone on the street to get out of the way since the horn didn’t work either. When we got to Main Street I swerved the vehicle toward Burdine. There were some elderly men sitting on the steps of the old company store across the street. By then the vehicle was traveling so fast I went across both lanes and up on the sidewalk. No one ever moved faster than those old men that day. By then the vehicle was completely out of control and went back across both lanes and through the Standard Oil station next to the drugstore. The vehicle finally came to rest on the lawn of the First Baptist Church. The good Lord was with all of us on that occasion.

There is a tradition at Jenkins High School that the top two juniors with the best grade point average are designated to escort the seniors in for graduation. When Charles was informed that he was to be one of the escorts, he thought that I had something to do with it. I assured him that the guidance counselor made the decision, not me. When Charles told me that he did not have a suit to wear, I loaned him one of mine and what a handsome escort he made for the graduation ceremony. We were about the same size at that time, but he later grew to be much taller after high school.

Charles participated in several track and field events and excelled in all of them. At one track meet Charles jumped 45 feet in the triple jump. He came running over to me and proudly told me of his accomplishment. I brushed it off as being nothing special because I did not want him to become complacent. He let me know that his feelings were hurt. A few years later when he was in college he wrote me a letter and said that he then realized why I did not praise his accomplishment. That incident inspired him to work harder and in college he jumped 49 feet 11 inches. I told him that it did not take a great coach to see his potential. While at Jenkins High School Charles set records in the long jump, triple jump and 180-yard hurdles, which he still holds today. He also participated in basketball and football. At one football game against the Elkhorn City Cougars Charles scored 24 of the 26 points to defeat the Cougars soundly. He was also selected as ‘Most Valuable Player’ in basketball, football and track in the same year at Jenkins. No other athlete has had that distinction.

At the University of the Cumberlands in Williamsburg Charles excelled in athletics, academics and in character. For three years in his college career Reed received the Most Outstanding Track Athlete Award and was captain of the track team. He was KIAC long jump, triple jump and 400 intermediate hurdles champion for three years and the record still holds in each event. Reed was also the NAIA District 24 champion in the long jump and triple jump for three years and held the records for each event. While at Cumberland he held the records for the long jump at 24’10” and the triple jump at 49’11”. Charles was named to Who’s Who Among Athletes in American Colleges and Universities and Who’s Who Among Students in American Colleges and was awarded the T.J. Roberts Campus Leadership Award. He was the cofounder and first president of the Black Student Union at Cumberland. The Charles Reed Track and Academic Scholarship was established by Cumberland in his honor. Reed earned a bachelor’s degree in psychology from Cumberland in 1975 and received the Outstanding Alumni Award in 1979.

Upon graduation from Cumberland, Charles began a five-year career with Bethlehem Steel Corporation in western Pennsylvania involving various management positions. In 1980 Charles was recruited by ARCO and the family moved to Denver, Colo. This began a series of management relocations to positions of increasing responsibility. He was manager of Organization, Compensation and Payroll for ARCO International Oil and Gas Corporation. Currently, Charles is president of Reed Enterprises Inc., a company with five Schlotzsky restaurants and 90 employees in Plano, Allen and Frisco, Tex.

Reed is married to his grade school sweetheart and wife of 40 years, the former Clara Higgins, a 1975 alumna of Cumberland. She has earned two master of arts degrees and a doctoral degree in theology. She is an elder in the United Methodist Church, where she is the district superintendent and responsible for 260 pastors and 80 churches. Charles and Clara have one child, Crystal, and one grandchild, Camryn.

When he was inducted into the university’s athletic hall of fame in February, he called me and asked me to be a part of this momentous occasion. I was honored that Charles appreciated how I had encouraged him to be something extraordinary. His high school friend Gary Tucker and his wife Cathy were also invited to share the moment with him.

The greatest thing a coach can ever ask for is to see a person come from a disadvantaged background to succeed in life. Charles Reed has certainly done that.

D. Charles Dixon is a former schoolteacher and coach at Jenkins High School. In 1993 Dixon was elected to the Kentucky High School Athletic Association, Cross Country Track Coaches Hall of Fame for his accomplishments as a track and field coach.