One day, it all changed 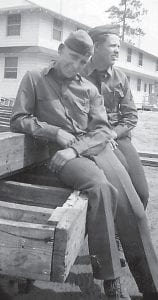 Wesley Yonts (foreground) posed with an Army buddy in the days before things got serious after the Japanese bombed Pearl Harbor.

Wesley Yonts was born on the cool frosty morning of March 2, 1921 on Millstone Creek in Letcher County to Martin Van Buren and Rosie Alafair Yonts. His father was a coal miner who provided adequately for the family. His mother was a hardworking housewife and mom. The family was loving, but life was hard. At the age of six, Wesley’s mother died in childbirth. By the time Wesley was nine, his father died from pneumonia most likely caused by black lung disease.

Being the next-to-youngest of 11 children (two half siblings from his dad’s first wife, who also died, and nine from Wesley’s mom), he was able to live with several of his older siblings for the next 12 years. Wherever Wesley was living, he did what he could to help out — hoeing in the garden, milking the family cows, trying to hunt with the adults, all the while still being mischievous enough to earn a few spankings from whoever he was living with at the time. All in all, Wesley lived a typical life of someone his age in the mountains for that time. 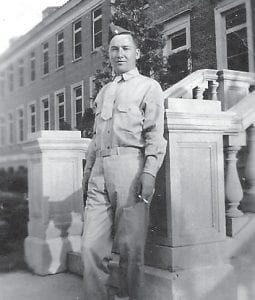 The late Kloss Whitaker of Letcher County is seen in this photo taken during the time of the second World War.

At about age 17, Wesley began to ponder his future, and after finding the employment prospects in the mountains rather slim, he decided to cast his lot with Uncle Sam and the U.S. Army. He first went to the recruiting station in Bristol, Virginia, but made the mistake of telling the recruiter he was only 17, and was told to go home and come back when he was a year older.

A few months later, Wesley did just that. He presented himself for his “pre-physical” examination late in the day on September 28, 1939, where he weighed in at 119 pounds. The “pre-physical” was actually standard practice at that time for young men coming from eastern Kentucky to join the Army, as the minimal weight requirement to actually join was 120 pounds and many of those seeking to join didn’t quite reach that standard. Wesley was told to eat a bunch of bananas before arriving for his offi cial physical examination the next morning. He duly ate the required bananas and weighed in at an official 121 pounds. Before he knew it, Wesley was on a train to Richmond, Virginia to formally join the Army.

When it came time to choose which part of the Army he wanted to spend the next several years in, he initially told the assigning officer “Infantry, I guess.” But because the officer didn’t need any more infantry enrollees or because he did need enlistees in the recently expanding “heavy artillery, he promptly informed Wesley that he didn’t want the infantry, because they would “march you to death.” Instead, he advised the artillery would be a much better choice. The officer then asked Wesley if he would like to join the heavy or light artillery?” Wesley chose the light artillery. Well, this must not have been the right answer either, so the officer further advised Wesley that he didn’t want the light artillery because he really wanted to be as far away from the fighting as possible. And so, the heavy artillery it was.

Wesley was assigned to the 36th Field Artillery Battalion, stationed in Ft. Bragg, North Carolina, where he began his formal training as a “cannoneer” to man and fire the 155 mm guns that eventually came to be known as the “Long Toms.”

Between the actual training and drilling, there was always enough time to get into and out of all kinds of trouble, and that was as much a part of the whole experience as learning to fire the guns.

Even though it had been almost 75 years since the Civil War, the folks in the Battalion were from either the North or South and there was ample time to revisit these matters, usually in a non-violent manner but sometimes not. With Wesley still a bit on the slight-of-frame side, he just tried to stay on the sidelines as much as possible. Fortunately for Wesley, soon after he arrived at Ft. Bragg he became acquainted with three other fellows from Letcher County — Kloss Whitaker, Edward “Speedball” Spencer, and David Brinkley. Koss, Speedball and David had served together in the Civilian Conservation Corps ( CCC) during the Great Depression years. After deciding to join the Army together, they referred to themselves as the Three Musketeers. Recognizing another Letcher Countian, they promptly welcomed Wesley into the group and their new name became “The Clan.”

Kloss was rather big physically and never shy about defending himself, so he was a good person to be friends with. Speedball was always good at stirring the honey pot, with Kloss usually being the one to settle the matter if needed. David and Wesley were basically along for the ride.

“ The Clan” continued to hang out, watch out for each other, and get into and out of some not-too-serious trouble. Then abruptly, on December 7 1941, the Japanese attacked Pearl Harbor and everything changed.

Note: Wesley Yonts now lives in Hazard, where he is an ordained Old Regular Baptist Minister who still preaches. His family is in the process of collecting information on his service time to possibly write a book. If anyone reading this article is familiar with or a family member of other members of “The Clan,” please send your contact information to The Mountain Eagle, P.O. Box 808, Whitesburg, Kentucky 41858, or e-mail mtneagle@bellsouth.net.