One day warm, the next day cold 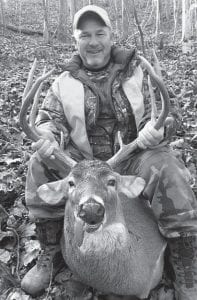 Michael ‘Goose’ Absher of Whitesburg killed this 8-pointer on Nov. 20.

How do you like the weather we are having? One day warm, the next day so cold you freeze your tush off. Each day I am very thankful it hasn’t been all that cold and freezing yet as it is time to fill the propane tank.

How many of you braved the crowd for Black Friday?

The day before Thanksgiving it showed on television the lines of people standing at a free store at downtown Cincinnati. People had been waiting all night to get a box of food for Thanksgiving dinner.

I bet the Friday after Thanksgiving there were lots of the same people standing in line for Black Friday sales!

Did everyone have a good Thanksgiving with plenty of turkey and dressing and all the trimmings? I am thankful it is over.

This year I can say was anything but enjoyable for myself and several others.

The decision was made for me with my state check. I had thought it was the fourth Wednesday as that is when my check is deposited.

My oven coil is still out so I was going to my son Keith Ballard to use his oven as he doesn’t live that far from me. Finally I said to heck with it. I had a talk with the chicken trying to decide if I wanted chicken and dressing or chicken and dumplings, and dumplings won out.

I was going to fix pudding, layering it in a pretty dish with whipped cream, but no such luck as I burned the pudding so I don’t have to worry about too many calories for Thanksgiving.

I did have some high points in my day. Two of my grandchildren, Jamie and Jodi Gray, stopped by for a good visit. Jodi can walk into a dark room and light it up as she is like a ray of sunshine on a dreary day. Jamie is sort of quiet and a laid back kind of guy. He is 19 years old.

I showed Jodi a little lace jacket I had recently gotten, and while letting her see the top I wanted to wear with it, plus get her opinion, old silly me turned around and sang, ‘I’m Too Sexy For This Shirt.’

Jamie got an odd look on his face and started laughing so hard as I have never said anything like that to anyone much less any of my grandchildren. It is a saying that went around for a while and the kids would use it.

Keith worked so it was almost 7 p.m. when he stopped to pick up his supper .

My granddaughter Jennifer Proctor called and begged me to come to their house and have dinner with her and the family, even offered to fix Keith a carryout dinner. Keith called me later and said the chicken and dumplings were delicious. Jodi had to have a container to go.

Keith doesn’t care for pumpkin pie. I love it but it sure doesn’t like me, so I had no pumpkin pie, no banana pudding either, and no calories to go to my hips.

My heart yearned so much for the phone to ring and hear my brother Richie telling me how good the house was smelling with Wanda’s turkey and how good a piece of pie tasted, except Richie would say he had been up all night cooking.

Wanda had all her family for Thanksgiving so I know it helped her, and finally I couldn’t take it anymore. When I could talk without crying I called Wanda and we talked briefly. An old Porter Wagoner song comes to mind, ‘I Bowed My Head and Cried Again.’

Oh well it is come and gone and Christmastime will be here in the blink of an eye.

My deepest sympathy goes out to the family of Kenneth and Glenora Eldridge, as Kenneth lost a brother, Clyde Eldridge, early Thanksgiving morning. This is Gary Eldridge’s uncle that I so often mention and admire in my column. Kenneth and this set of Eldridges are from the Bull Creek area.

I don’t know anything about Gary except I’d have known his uncle, Bob Bryant, who is from the Johnson Fork area over 40 years. Though I just met Glenora at Letcher County Picnic, it seems as if I have known her forever too.

Glenora is a lot like me in her way of saying things. She said there are so many Kentuckians in Indiana that when they leave town, you may as well turn the lights out!

Doyle and Betty Ison had all their family home for Thanksgiving. If I had known it was going to be such a beautiful day, I would have told Betty to have their son Mike bring his motorcycle, and say, “After you stuff yourself, let’s sneak a ride on it.”

I am sure his wife Rhonda wouldn’t have minded as after all it was Thanksgiving and you should share with the needy. I sure could have stood a little excitement. Now quit laughing!

I finally found a little time to spend with Betty. I plan to take my daughter Kay Gray to see the boat dock (deck) that Doyle built, plus they have enough room in the dining room that that you could either use as a bowling lane or skate on, and I am serious.

It is a good thing I am so scared of falling as I would love to do what I used to do as a child. Mom would wax her floors with Johnson Paste Wax and I would catch her out of the room and skate on it in my socks.

Doyle installed beautiful hardwood flooring, oh yes it is tempting! However sometimes the saying “Momma didn’t raise no fool” has to apply to me.

Betty and I took a trip back to the mountains in our conversation. I needed this time as it has been too long since we have sat face to face talking. Usually we talk on the telephone.

Les and Pat Wagner, I haven’t heard a peep out of you since your family had Thanksgiving in Pigeon Forge. Since you have adopted me as a family member, the next time you go without me here’s what I am going to do. I’m going to call your cousin Don Wagner and tell on you! Then I am going to come to your house and lie down on the floor kick and scream and throw a tantrum. Now Pat, do you still love me?

Gwen Huff Farmer had so many deer hunters at her place, she was in her height of glory.

Shirley Wells, I hope you had a great time with your family.

Johnny and Ann Calihan had an early visit from their daughters Sue and Lauren from South Carolina. I am sure Ann had a wonderful meal and good time with everyone on Thanksgiving Day.

I mentioned above of getting the news Thanksgiving morning of Kenneth Eldridge’s brother dying. Sadness wasn’t over for me as my dear friend Norma Ashcraft called to say Hazel Boggs Williams died about 5:30 on Thanksgiving.

Hazel was originally from the Eolia area, toward Cumberland. She used to host Kentucky Days for many years. She was one of the most perfect ladies I have ever met. She was beautiful, and dressed in a fashion that was nothing but stunning.

Hazel had a band for a long time. Hazel and Emma Engle are two special ladies, and I wish I had their class, beauty and talent.

I just found out that Frieda Boggs Johnson is a cousin to Hazel. It is a small world after all!

Shirley Godbey and I went to the FOP Lodge in Huber Heights, which is on the outskirts of Dayton, to see Dixie Ryders and Clarence Kelly & NuCut Road. The bands were fantastic. I was very tired as I had spent all day putting up Christmas decorations for a friend, but when the music started I got a second wind and forgot about being tired.

Dec. 8 at American Legion Post in Milan, Ind., Rural R #2, a bluegrass band from Rising Sun, Ind., with none other but Gary Eldridge on the mandolin will be opening for The Grascals, who have Jamie Johnson from Milan area. You really don’t want to miss this show.

Well folks, I have had several interruptions and let time slip away from me. I hope this isn’t too late for The Mountain Eagle.

Until next time, take care of yourselves and be kind to one another.