One of baseball’s worst trades ever 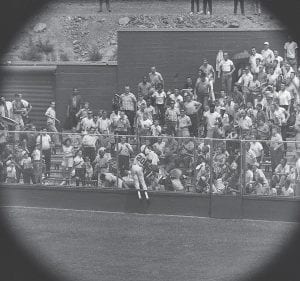 STILL A RED THEN — Cincinnati right fielder Frank Robinson leaps high into and above the screen trying for a home run ball hit by Milwaukee’s Hank Aaron in the fourth inning of a game played July 29, 1962 in Cincinnati’s Crosley Field. Aaron hit two homers, but Robinson duplicated the feat. Robinson’s second round tripper with a mate aboard in the seventh gave the Reds the winning margin. The score was 8-6. (AP Photo)

Like Cincinnati Reds fans everywhere, those in Letcher County were startled to learn 49 years ago this week — on December 9, 1965 — that Frank Robinson, the National League’s top player, had been traded to the American League’s Baltimore Orioles for starting pitcher Milt Pappas and two role players, outfielder Dick Simpson and pitcher Jack Baldschun.

“The trade is widely regarded as one of the worst in Major League baseball history,” The History Channel says today.

The trade came just four years after Robinson, who had been the NL’s Rookie of the Year in 1956, won the league’s Most Valuable Player award while leading the Reds to the 1961 World Series, where they lost to the New York Yankees.

“Responding to the outrage of many Reds fans,” the History Channel says, “General Manager Bill DeWitt said Robinson was ‘an old 30.’”

In his first season with the Orioles, the “old” Robinson won baseball’s coveted Triple Crown with 49 homers, 122 runs batted in, and a .316 batting average. He also led Baltimore to a World Series victory over Los Angeles while becoming the first player to win MVP honors in both leagues. 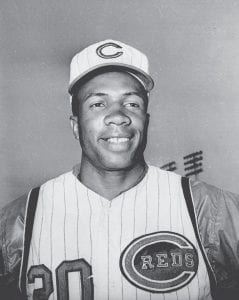 Frank Robinson is pictured with the Cincinnati Reds in 1964, a year before he was traded to Baltimore. (AP)

Pappas pitched for the Reds for only 2-1/2 seasons, leaving with a record of 30-9. Baldschun and Simpson lasted only two seasons.

Hall of Famer Robinson is now 79.