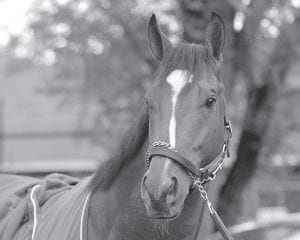 COLT COULD HELP MAKE DERBY HISTORY — Kentucky Derby hopeful Goldencents stood outside Barn 45 earlier this week as he got a bath following a morning trip to the track at Churchill Downs in Louisville, where the three-year-old colt will run in the Kentucky Derby. (AP Photo/Garry Jones)

A little known jockey and a lightly regarded horse pulled off an upset victory for trainer Doug O’Neill at last year’s Kentucky Derby.

On Saturday, he’ll give another relative unknown a chance of not only winning the big race but joining him in the record books if that happens.

Kevin Krigger, the first black jockey in the Derby since 2000, will be aboard O’Neill’s Goldencents, considered a much stronger contender than last year’s winner, I’ll Have Another.

Only six trainers have won consecutive Derbies in 138 years, and no black jockey has won since 1902.

The 29-year-old Krigger hails from St. Croix, Virgin Islands, and had some success on the smaller Northern California circuit before trying his luck in the big leagues of Los Angeles.

O’Neill is a friend of Krigger’s agent, Tom Knust, and was open to a suggestion of having the jockey swing by his barn last summer. So Krigger started working out Goldencents in the morning about six weeks before the colt’s racing debut. 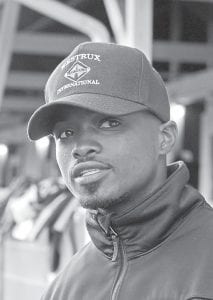 “He got off him and in his best U.S. Virgin accent just said, ‘Wow, man, this horse can really run,’” O’Neill recalled. “I had Kevin and Tom starting planting the seeds to the owners of Goldencents, and they fell in love with him right away, too.”

And suddenly, the Derby rookie was the colt’s regular rider. They’ve won four of six races together, including the Santa Anita Derby, which I’ll Have Another won last year before heading to Churchill Downs.

“Of course, no matter how much you love a person they’ve got to have some chemistry with the horse,” O’Neill said, “and thank God, not only is he a great person, a great rider, but he’s got great chemistry with Goldencents.”

One of Goldencents’ owners is Louisville basketball coach Rick Pitino,whohasa5percentshare in the colt. Krigger had never watched a college basketball game start to finish until he saw the Cardinals beat Michigan for the national championship earlier this month.

“That made me a Louisville Cardinals fan,” he said.

Krigger figures to pick up a lot more fans of his own if he can win the Derby, a feat no black jockey has accomplished since Jimmy Winkfield won his second straight in 1902. He keeps a picture of Winkfield in his locker.

But by 1903, business began drying up as white owners and trainers relied less and less on them. Marlon St. Julien was the Derby’s first black jockey in 79 years when he rode Curule to a seventh-place finish in 2000.

“I want to win the Derby because that’s something that I want to do,” Krigger said. “Being African American is just a part of it.”

Of some 1,000 jockeys aboard thoroughbreds in the U.S., only 50 are black, according to the Jockey Guild.

“I think the reason is there aren’t many African-Americans interested in riding horses,” Krigger said. “And it’s really hard to get into the Kentucky Derby for any jockey, whether you’re African- American, Hispanic, white . . . it doesn’t matter what race or color you are. There are 20 horses. It’s not a race that is meant for everyone. Usually, only the top riders get in.”

Krigger considers himself to be one of them. He recently finished 10th in the jockeys’ standings at Santa Anita’s winter meet, winning at a 15 percent clip.

“I would love to see maybe five years, 10 years from now, we have African-American riders in every (jockey) colony,” he said. “I’m proud of myself, that’s the main thing.”

Krigger has wanted to be a jockey since he was 5, when he hopped on a horse his grandmother gave him. He would watch races on TV, and “ride his mother’s couch like it was a horse,” his father, Albert Krigger, said.

When he was in kindergarten, Krigger told his mother about his future career plans.

“She thought I was kidding,” he said.

Horses became his favorite mode of transportation and at times a distraction growing up.

“The teacher used to call me and say, ‘Your son is out on a horse and it’s school time,’” his dad said. “I had to go through the bushes and find him.”

Dreams of winning the Derby took hold when he was winning match races in St. Croix. (Victor Lebron, another jockey from the island, will ride Frac Daddy in the Derby. A party is planned back home to celebrate both riders.)

“I’ve been watching the Derby probably more than the majority of riders my age,” said Krigger, who came to the U.S. in 2001.

He was watching last year when unheralded Mario Gutierrez guided I’ll Have Another to the winner’s circle. The colt went on to take the Preakness, setting up a Triple Crown try in the Belmont. However, he was injured the day before the race and was retired.

O’Neill believes Goldencents can follow a similar path to victory.

“Last year with I’ll Have Another we were all fired up after winning the Santa Anita Derby, but really still thought in our minds that the Kentucky Derby was so far-fetched,” he said. “You need such a great horse and so racing luck to get it done. Having got it done, this year’s dream just seems more real, like we could possibly do it back to back.”

Krigger will have about 30 friends and family — including his fiancee and his four children, ages 2 to 11 — cheering him on Saturday.

“I’ve always thought of myself as the best rider in the world and there’s no reason why I shouldn’t,” he said. “Goldencents is the horse that is going to help me prove that.”

And the dad who had to get his son off his horse and off to school has a good feeling about this weekend.