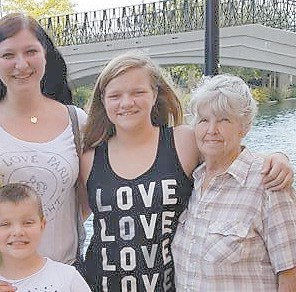 Southern Ohio correspondent Rose Ballard is pictured with three of her grandchildren, (left to right, back) Sarah and Katelyn, and (front ) Kyle).

Hello everyone! As summer has arrived with some humidity and hot weather, it takes me back to childhood in the mountains of eastern Kentucky once more.

There wasn’t such a thing called air conditioning and I really don’t recall any fans. Mom raised the windows, and of course there were no window screens or screen doors. Mom would leave the doors open during the day and close the doors at night, securing them with a wooden latch.

We slept with the windows open at night. I remember the cool night air caressing my face as I drifted off to sleep or when I woke up during the night.

Over the years times have changed so much it is not safe to leave a window open in the day, much less at night. Oh how I wish I could go back to the safe times of years ago!

During hot weather there weren’t any swimming pools in your yard, but you had the river to swim in. I really am surprised that children weren’t drowned in the era of my growing-up years at Roxana. I know there was a favorite swimming hole, I think called Black Bridge, close to Kingscreek, which was deep but not so deep that you were afraid of it. At the mouth of Mill Branch was also a favorite place to swim.

In the summer you didn’t have to worry about filling the galvanized washtub for your weekly bath, as you could go to the river for a daily bath.

I’ve seen Grandma Hall take her clothes to the river to wash them. I don’t know how she struggled back up the hill with wet clothes to hang out on her clothesline.

We’ve had several days of hard rainfall, and there’s a gravel road next to my house so when it rains I am tempted to wade through the puddles barefoot.

As thoughts return of my grandma Rosa Hall, I am reminded of how she existed on something called old age pension. I believe she received $13 a month. There were no food stamps in those days, nor churches where you could go pick up a box or bag of free food as so many do today.

I was about 12 when something called commodities came into effect in Roxana. I remember people getting powered milk, cheese, and a few more things plus peanut butter. Until then the only time I had ever seen peanut butter, was when some kids at Mill Branch School would bring peanut butter sandwiches to school.

Grandma would get the commodities, since she had hardly any income.

Dad always worked and though we didn’t have much we still had food, thanks to being able to buy on a tab at Burke’s or Amburgey Grocery.

There were tough times during our marriage, but thank God, I’ve never had to ask for assistance. I rather go hungry than go to a church or some food pantry. In my opinion if I can afford a cell phone and gas to go wherever I need to go, I will make do on other things.

Now if they gave nutritional drinks I just might change my mind. It isn’t that I wouldn’t qualify, it’s I have too much pride

Saturday, I started out as usual, by waking feeling nauseated. My niece Sue Hall from the mountains called saying she was coming by for a while.

My daughter Anna Nottingham along with Sarah, Jessica, Katelyn and Kyle, was going on a day trip to Indianapolis and wanted me to go, but all I really wanted to do was just stay home.

Different roadblocks popped up for my daughter.

Sue came and so did Anna and the kids. I didn’t realize it had been almost 22 years since these two had seen each other at Mother’s funeral.

The adventure to Indianapolis is one I shall never forget. Anna did some researching, so we went to a place to eat called the Mayberry Cafe in Danville, Ind., about 30 miles from Indianapolis. It was a fascinating place complete with Andy’s sheriffs car parked in front.

They had chicken and vegetable soup on the menu. I was able to eat a little of it, and part of a baked potato. The food was delicious. Of course I wanted to stick my finger in everyone’s dessert, since I was afraid to try them.

After the delightful meal, Anna drove back to Indianapolis, and that’s when a surprise was in store for us all. Once again Anna had done research, and she chose a place called Old World Gondoliers. It looks like a huge canoe with a man standing on the end rowing it.

The man sang some of the most beautiful songs in Italian, and I recognized a few of the melodies.

The trip was only a half hour on the canal, and in that half hour I found the peace in my heart that I needed. The whole afternoon was wonderful to spend with my family, which is a rare thing for me to do.

I hope when the world comes crumbling around my shoulders I can look back to Saturday afternoon. Thanks again, Anna, for such a wonderful day of making memories.

My daughter Kay Gray along with her husband Clarence, their daughter Jodi Gray, and her friend, all spent a week in their home in Destin, Fla. Kay and Clarence and friends spend a lot of time in Indianapolis, so I asked Kay if she had ever been to the canal and on this gondola ride.

Kay has taken the paddleboats but not the huge gondola. She wants to go on a midnight cruise on it.

Les and Pat Wagner spent several days in the mountains. Pat said the weather turned sort of cool and it rained a lot while they were there. They really enjoy being with their families when they are in the mountains.

Becky Hasty, along with Polly and Becca, all spent time in Augustine, Fla., enjoying themselves.

Johnny and Ann Calihan, along with their daughter Carol, went to West Virginia, and were planning on attending a family reunion with Bill Ison and his family, Hayward Day and Kim, and Hubert Caudill from North Carolina. I really don’t know how many were getting together.

Things didn’t go as planned for Johnny and Ann. In the process of transferring things from their son Gary Calihan’s car to Carol’s, their suitcase got overlooked that had Ann’s medication in it. After arriving at the motel Ann found out what had happened. They had to cancel their reservations as Ann couldn’t stay without her insulin and other medication.

The motel wasn’t too keen to give them back their money, but the manager did refund it to them. The family got to spend a few hours together.

I won’t go into details, all I will say is that Johnny Calihan celebrated his 90th birthday in May. This wonderful man is still in very good shape as he can stand on a bucket and climb in a window.

As I’ve said before, Ann Calihan and I can find something to share a laugh about regardless of the situation.

Bonnie Ingram, I hope you are doing all right. I miss your column when it isn’t in The Eagle.

Happy birthday wishes to those who are celebrating this week.

I heard a very true saying that I need to abide by. It goes, never argue with a liar. You will never win, as they believe their own lies. I’ve also heard it said that the only time someone doesn’t lie, is when their mouth is shut!