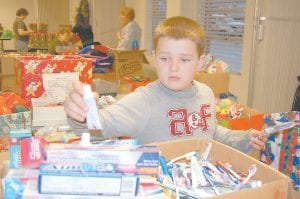 Justin Polly, 9, of Craft’s Colly, was busy putting toothpaste and toothbrushes in boxes at the First Baptist Church in Whitesburg on Monday, the first day organizers began collecting gift-filled shoeboxes to be delivered to needy children worldwide through Operation Christmas Child, a project of Samaritan’s Purse headed by Franklin Graham. In addition to donating gift-filled shoeboxes, some people donate items including toiletries, socks, small dolls, mittens and hats for volunteers to place those items into shoeboxes. This is the fourth year Justin has volunteered with Operation Christmas Child. The church is located at 170 Madison Avenue in Whitesburg, where shoeboxes may be dropped off from 4 until 8 p.m., November 14-16. On November 17, shoeboxes will be collected from 1-6 p.m. and from noon until 8 p.m. on November 19. (Eagle photo)