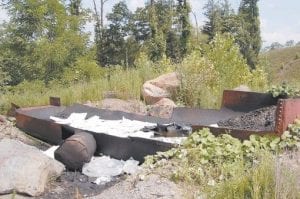 Millstone resident Jerry Collins notified state and local environmental officials after he found this tank leaking an oily substance at an abandoned mine site near his home. White absorbent pads were placed on top of the liquid by hazardous material responders who answered Collins’s call to E-911.

A Letcher County resident is concerned that an old skid fuel tank left on a strip mine site in Millstone is being used to burn crude oil, but officials say the tank might have filled up with rainwater after someone cut the top off to sell for scrap metal.

Jerry Collins, of Millstone, said he called E-911 last week after walking his dog on an old mine site and finding what he identified as crude oil or used motor oil coming out of a tank that was missing its top.

“When we first got the call that night we didn’t have any information on the property owner,” said David Leo, Environmental Response Team Coordinator for the Kentucky Department for Environmental Protection (DEP) in Frankfort. 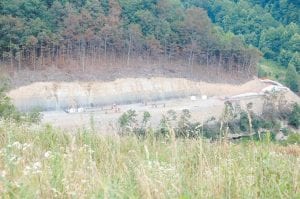 METHANE KILLING TREES? — Jerry Collins, of Millstone, said methane poisoning has killed trees located on a natural gas well site near where he located a cut fuel tank with an oily substance spilling out the top. “Instead of capturing it they just vent it out and it destroys everything around,” Collins theorized about the trees above the well site.

Leo said Deane Mining LLC is listed as the owner of the site and will be responsible for cleaning up the contaminated area. He said the property should be cleaned up this week and that someone from the Environmental Response Team will come make sure it is safe.

“We feel it is contained right now until clean up proceeds,” said Miles.

Leo said the situation was most likely the result of an act of vandalism and theft.

“It looks like somebody went up there and tried to cut the scrap metal,” said Leo. Miles said theft of such tanks for sale as scrap metal has become a problem.

“Any time they find any old tanks or transformers they are trying to sell them for scrap metal,” said Miles. “It is a common problem in this area right now.”Leo said the tank filled up with rainwater after the top was cut off.

“Oil floats on water,” said Leo. “As the rainwater filled up the tank, the oil overflowed the top.”

Leo said the substance was waste oil and most of it soaked onto the ground. He said the tank is located far away from any water source.

“It didn’t get into any streams,” said Leo. “It is not going to impact any water systems.”

Collins feared that if the spill wasn’t addressed it would eventually reach the Whitesburg water supply.

“The people in Whitesburg need to know,” said Collins.

Collins suspects that a natural gas pipeline company working in the area was using the cut tank to burn used oil.

“They’ve just tried to burn it rather than recycle it,” said Collins. “Who else would have that much oil?”Collins said workers with the pipeline company are the only people who have been traveling through that area.

Leo said the contaminated area does need to be cleaned up and that officials may never have known about the problem if Collins hadn’t reported it.

“It’s good when people call these things in,” said Leo. “If he hadn’t called in we would have never known.”