Opposing coach likes what he sees in UK’s future QB 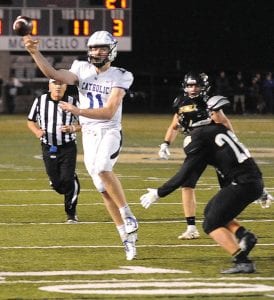 Lexington Catholic quarterback Beau Allen, a UK commit, has impressed Boyle County coach Chuck Smith not only with his passing but his ability to move in the pocket to get off his passes. (Advocate- Messenger Photo by Derek Brightwell)

Boyle County head coach Chuck Smith has won six state high school championships and also spent eight years as an assistant coach at the University of Kentucky, where he coached linebackers such as Wesley Woodyard and Danny Trevathan — who are both still playing in the NFL. One of his former Boyle players, Jacob Tamme, also played at UK and then nine years in the NFL.

Smith has watched Lexington Catholic quarterback Beau Allen play against his team the last three years and likely will see the UK commitment in the playoffs again next month. From all he’s seen, Smith likes what the future Wildcat can do.

Allen has thrown for close to 3,000 yards this year, and through eight games had 29 touchdown passes to just three interceptions 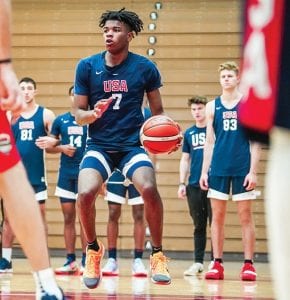 Jaden Hardy has a bevvy of scholarship offers and his high school coach thinks the junior is the best shooter and offensive player in the 2021 recruiting class. (USA Basketball Photo)

258 pass attempts. However, he also ran for nearly 400 yards and nine scores in those eight games, too.

“The fact that he can run the football puts a lot of pressure on the defense and then is pretty accurate throwing makes him really good,” Smith said. “He can scramble out of danger in college. He will not be a running quarterback because they (opposing players) are all fast.

“I do not consider Beau fast or slow. He just has a good feel for the pocket, steps up, moves right or left or does whatever he has to do throw the ball and that will help a lot at the next level. He just knows how to play.”

Kentucky basketball assistant coach Joel Justus didn’t hold back at the recent Kentucky Women’s Clinic when he talked about the “family” atmosphere that coach John Calipari and his wife create at UK for players and coaches.

“It is fun here. It is Ellen and Cal. We are at their house. The kids are over there. Their dogs are running around,” Justus said.

“It is fun to be here because Coach makes it about players. After (Big Blue) Madness almost everyone’s family was in the gym at practice. Cool to see families happy (getting to watch their sons/ family members practice).”

Justus said the way UK recruits factor into the family atmosphere is more than most understand.

“It is really not out there how much Coach emphasizes family. It is real here. That starts when we go out and find the right people,” Justus said. “That is something I really feel good about working here. It never feels like work because we love being around each other and we are all able to laugh and smile because of the type of people we have in this program.”

Kentucky sophomore Rhyne Howard not only was UK’s leading scorer last year but she was also the consensus national freshman of the year. Kentucky sophomore Ashton Hagans was a starter for coach John Calipari as a freshman and the co-SEC Defensive Player of the Year.

At the UK Women’s Basketball Media Day, I asked Howard if Hagans could guard her and keep her from scoring.

“I would just have an arm bar up because I know he is pretty active. I wouldn’t try to do anything fancy,” Howard said. “I would be able to score on him … easily. Just keep it simple.”

“Yes,” Howard said before adding there was not anyone she didn’t think she could score on.

Junior teammate KeKe McKinney said she was backing Howard “100 percent” in this match-up.

“She would definitely do that and give him a run for his money on anything else,” Patterson said.

But score easily on Hagans?

“I believe it. She could do it,” Patterson said.

McKinney also had no problem with picking Howard as the best basketball player on campus.

“Yeah, I believe Rhyne is great and can compete against anybody, so yes I think she is the best player on campus,” Patterson said.

Could Kentucky play a basketball game against Detroit Mercy next year?

Detroit Mercy coach Mike Davis put the odds of UK coming to Detroit for the 2020-21 basketball season at “99.9 percent” during his team’s media day. That’s not exactly a coach making a wild prediction when he obviously is almost positive it will happen which makes sense since UK coach John Calipari’s son, Brad, is now on the Detroit Mercy roster. He transferred this season after spending three years at UK and has two years of eligibility left.

The game could be at Little Caesars Arena— the home of the NBA’s Detroit Pistons — or on campus at Calihan Hall as Davis indicated he would prefer. Calihan Hall is scheduled for a court replacement in the coming year but it would seem a game on a NBA floor would fit John Calipari’s standard operating procedure a lot better even if his son is involved.

Detroit Mercy will play North Carolina State, Clemson, Notre Dame and Gonzaga this season but none of the games are in Detroit. Mercer was 11-20 last year and is ineligible for postseason play this year due to academic issues that did not involve any current coach or player.

Tony Paul of the Detroit Free Press says the staff “really likes his (Brad’s) potential and considers him a good second option from 3-point range.”

I also asked Paul if Brad Calipari’s arrival had created any kind of buzz for Detroit Mercy basketball.

“Not sure his arrival has done that because the fan base at Detroit Mercer isn’t exactly overly passionate,” Paul said.

“He is the best offensive high school player I have certainly seen in the last several years. He’s a phenomenal shooter. No one shoots like him and Kentucky realizes that,” said Kaufman. “He’s the best shooter in the class of 2021, maybe the best overall offensive player in the class. He’s the No. 1 shooting guard but he’s bouncy and gets to the rim.”

Kentucky has already extended a scholarship offer to the 6-5, 185-pound junior guard, a consensus top 10 player in the 2021 recruiting class who averaged about 25 points, eight rebounds and seven assists per game as a sophomore. He has a long list of scholarship offers that includes Florida, Texas Tech, LSU, Kansas, Alabama, Memphis, Washington, Missouri, Oklahoma, Arizona, Illinois, Vanderbilt, Texas A&M, Mississippi State and others.

Kaufman says not to think Hardy can only shoot because he can do a lot more.

“If you are up close to him, he will go by you in a second. He has great leaping ability, he’s fearless and he will attack the rim against anybody,” the Coronado coach said. “He’s really a phenomenal passer. We have a game against Bishop Gorman (one of the nation’s best teams) last year and he had seven straight assists.

“He is long at 6-5. He is in great shape. He’s only a junior but has a great body. He just has to fill out. As he gets bigger and strong his upside really is unlimited. He can do so many things with the basketball. He’s really exciting because he’s also a great defender and really good rebounder. More than anything he wants to win and gets his teammates to want to win and do whatever it takes to do that. There are not a ton of high level players that have spirit about him.”

Hardy shot almost 48 percent from 3-point range last year despite putting up a high volume of shots. Teams often also double teamed him but he not only can split the double team to drive inside, but he’s also able to see the floor to find open teammates.

“When teams double team him the ball is up the floor in two seconds (via passing) or he is going by somebody,” Kaufman said. “He is very, very good at imposing his will on the basketball court and does it much smoother and with much less problem than anybody I have seen recently. We are going to use him a lot more at the 1 (point guard) this year.”

Kaufman says Coronado is a highly ranked academic school with a lot of advance placement classes and normally has the highest ACT and SAT scores in the state.

Hardy knows plenty about Kentucky’s basketball history, one reason he was thrilled to get a Kentucky scholarship offer personally from coach John Calipari even though he has more than 25 scholarship offers.

“Once they (Kentucky) showed an interest in Jaden, that’s an honor for any kid,” Kaufman said.