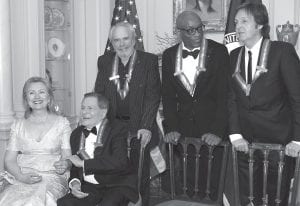 Secretary of State Hillary Clinton, left, talked with Kennedy Center honorees for 2010 Jerry Herman, Merle Haggard, Bill T. Jones, and Paul McCartney while waiting for Oprah Whitney to arrive for a group photo after a dinner held at the State Department honoring the recipients of the Kennedy Center Honors in Washington. (AP Photo)

Oprah Winfrey has come a long way since her childhood years in a Mississippi shack and in public housing with a poster of The Beatles on her bedroom wall. Earlier this week, she was honored with Paul McCartney, one of the Beatles she so loved.

Stars from Hollywood, Nashville and Broadway gathered in the nation’s capital on Sunday to salute Winfrey, McCartney and three others — country singer Merle Haggard, Broadway composer Jerry Herman and dancer Bill T. Jones — with the Kennedy Center Honors. The president and first lady Michelle Obama sat with the honorees and former Secretary of State Colin Powell.

Julia Roberts opened the show with a surprise nod to her friend, Winfrey.

“It’s a universal conversation starter: Did you see what was on ‘Oprah’ today?” Roberts said. “The first time I heard of a better fitting bra … or a fascinating politician named Barack Obama was on ‘The Oprah Winfrey Show.’”

Roberts said she was nervous to address the Washington crowd but nearly tricked them into looking under their seats for a prize — Winfrey style.

John Travolta took the stage to host a mock version of Winfrey’s show with Barbara Walters as his guest. He recounted a phone call he got from Winfrey when Hurricane Katrina struck New Orleans. She told him to fill his plane with medical supplies and meet her in Louisiana.

“So when Oprah calls, you answer,” he said. “Oprah makes it exciting to be responsible.”

Walters said she should get credit for jump-starting the 56-year-old Winfrey’s career. She said the future talk show host once imitated Walters’ style to win a Miss Fire Prevention contest but developed a style all her own.

“Simply put, she is the best interviewer ever,” Walters said. “No one comes close — not even me. And those of you who know me know how painful it was for me to say that.”

Jennifer Hudson sang “I’m Here” from “The Color Purple,” which Winfrey produced on Broadway after starring in the film. Hudson was joined by a choir from Winfrey’s alma mater, Tennessee State University.

For Winfrey, the prize comes during the 25th and final season of her talk show and just before she launches her new cable network, OWN, on Jan. 1. After her Washington visit, Winfrey will take about 300 audience members to Australia.

“You know what’s interesting is she spends her life celebrating others, but when it comes time for her, she’s very reluctant really,” Winfrey’s best friend Gayle King told The Associated Press. King said it was a fitting tribute for Winfrey.

Alec Baldwin introduced the tribute for McCartney, 68, lamenting the singer’s “long and winding road” to a solo career, being forced to sing in stadiums and requiring police protection.

“The National Institutes of Health called the epidemic Beatlemania,” Baldwin said. “There was no cure.”

The former Beatle was making his second visit to Washington this year for a culture award. In June, he won the Gershwin Prize for Popular Song from the Library of Congress.

“You know, great things just come in bundles,” he said.

“I’ve done a lot of things and been a lot of places,” Tyler said. “But I’ve never been prouder than I am standing right here at the corner of Pennsylvania Avenue and Abbey Road.”

James Taylor and Mavis Staples closed out the show with “Let It Be” and “Hey Jude.” They had Mc- Cartney — and the president — on their feet the entire time.

When The Beatles were storming America, Haggard, 73, was free from prison and making music, Herman, 79, was making Broadway sing and Jones, 58, was not yet a dancer but growing up in a migrant labor camp.

Since the 1960s, the new Kennedy Center honorees have helped define television, dance, theater and music.

At a White House ceremony before the show Sunday, they heard accolades from President Barack Obama who said the awards are important because the arts are necessary.

“Although the honorees on this stage each possess a staggering amount of talent, the truth is, they aren’t being recognized tonight simply because of their careers as great lyricists or songwriters or dancers or entertainers,” Obama said. “Instead, they’re being honored for their unique ability to bring us closer together and to capture something larger about who we are — not just as Americans, but as human beings.”

The show was recorded Sunday night for broadcast Dec. 28 on CBS.

Lansbury said Herman gave her a huge break when he pressed for her to be cast in the lead role of “Mame” over the objections of some producers. She said she’s never had a better entrance than sliding down a long banister on stage with bugle in hand.

Channing, 89, who starred in “Hello, Dolly!” sang “Hello, Jerry.” She said she knew it would make him cry.

For Haggard, Nashville turned out in force.

After the honors were announced in September, Jones, the son of potato pickers, said he could recall dreaming of big things as a 9-year-old boy in upstate New York.

He went on to create the Bill T. Jones/Arnie Zane Dance Company in 1982 with his partner Arnie Zane who died of AIDS six years later. Jones has tackled tough issues with his work, such as racism and mortality, sometimes sparking outrage.

On Sunday, he was hailed as a rule breaker and revolutionary by playwright Edward Albee, Claire Danes and others.

Jones said he’s often felt like an outsider, yet he’s being honored for helping to shape the country.

Jones said he could “feel the love” and said he was thrilled to be receiving the award while Obama is president. Still, he said he’s discouraged by the country’s direction. “I am trembling a little bit, actually. The discourse is so poisonous.”

In recent years, Jones has shared his talents with Broadway, winning Tony awards for his choreography in “Spring Awakening” and this year for his show “Fela!,” playing currently in New York and London. He said he hopes more artists will bridge the gap between the dance world and mainstream theater.

“We don’t want to be marginalized anymore,” he said. “Indiff erence is worse than dislike.”