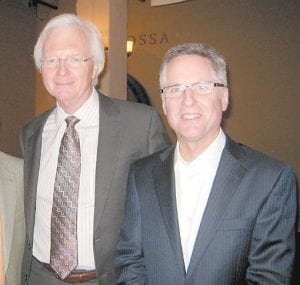 John Shoemaker, left, visited six doctors in his quest to find the best treatment for earlystage prostate cancer, and only Dr. Peter Carroll, right, offered what made the most sense. (AP)

John Shoemaker visited six doctors in his quest to find the best treatment for his early stage prostate cancer — and only the last one offered what made the most sense to the California man: Keep a close watch on the tumor and treat only if it starts to grow.

Very few men choose this active surveillance option. Yet Shoemaker is one of more than 100,000 men a year deemed candidates for it by a government panel. That’s because their prostate cancer carries such a low risk of morphing into the kind that could kill.

The risk for them is so low, in fact, that specialists convened recently by the National Institutes of Health say it’s time to strip the name “cancer” off these small, lazy tumors.

In the meantime, the panel wants more of those men offered the option of delaying treatment until regular check- ups show it’s really needed. That endorsement promises to fuel efforts by the Prostate Cancer Foundation and a few other groups to spread the word to the newly diagnosed.

Shoemaker’s journey shows how difficult that may be, from doctors who don’t even bring it up to the fear factor.

“With prostate cancer, you hear the “C’’ word, so to speak, and people freak out,” says Shoemaker, 69, a businessman from Los Altos, Calif., who was intent on examining all his options.

Five years after his diagnosis — and five biopsies plus numerous blood tests and ultrasound scans later — Shoemaker’s happy he found a surgeon who argued against immediate treatment. He’s confident his prostate tumor hasn’t grown, and avoided the pain and side effects of surgery or radiation.

Some 240,000 men a year in the U.S. are diagnosed with prostate cancer. Earlier this month, the NIHappointed panel found that most have the low-risk kind, a legacy of using problematic PSA blood tests to screen healthy men for possible signs of this slow-growing cancer that will affect most men’s prostates if they live long enough.

Yet 90 percent of such men choose immediate treatment such as surgery or radiation, risking serious and long-lasting side effects, such as impotence or incontinence, without good evidence about who will live longer as a result. One recent study tracked 731 men diagnosed with early stage prostate cancer for 10 years and found no difference in survival between those who had surgery and those who weren’t treated unless they went on to develop cancer symptoms, an older option known as watchful waiting.

Active surveillance is much more aggressive than watchful waiting — men get regular scans, blood tests and biopsies to check the tumor, although the NIH panel found the degree of monitoring can vary by medical center. Active surveillance is designed to monitor men closely enough that they can get curative treatment quickly if it looks like they’ll need it, well before any symptoms would begin.

“It’s not treatment versus no treatment ; it’s about timing of treatment,” Shoemaker’s physician, Dr. Peter Carroll of the University of California, San Francisco, told the NIH. He’s a wellknown prostate cancer surgeon who also leads one of the country’s few large active-surveillance programs, tracking more than 900 men for over five years. Most are treatment-free so far, and none has gone on to die of prostate cancer.

What’s the advice for men? The NIH panel said men with a PSA level less than 10 and a Gleason score that’s 6 or less are candidates for this type of active surveillance. The Gleason score measures how aggressive prostate cancer cells look under the microscope. Urologists can provide those numbers.

Then what? Today, what men decide to do next largely depends on the advice of the specialist they wind up seeing, and many either don’t offer active surveillance or present it in a negative way, as doing nothing, the NIH panel learned. There’s also the patient’s instinctive “get it out” reaction.

Within a few months, an interactive section of the site will be added to link men with doctors who offer active surveillance and track how they fare with input straight from the patients themselves, said Hopkins’ Dr. H. Ballentine Carter.

“To me, it’s an individualized approach rather than the one-size-fits-all approach of treating everyone,” Carter says.

Beyond whether and how men choose surveillance, behavioral scientist Kathryn Taylor of Georgetown University wants to know how they decide to stick with it. About a quarter of men abandon the observation approach within two or three years, and as many as half by five years, the NIH panel learned. It’s not clear how much of that was because they needed treatment, and how much was just the anxiety or getting tired of repeat biopsies.

Taylor is beginning a study of 1,500 newly diagnosed, low- risk prostate cancer patients at Kaiser Permanente in Northern California to see how many are told about active surveillance and what helped or hindered their decision.

“Living with untreated cancer is very difficult,” she says, “and not everybody can do it, not surprisingly.”