Options for protection vary for this flu season 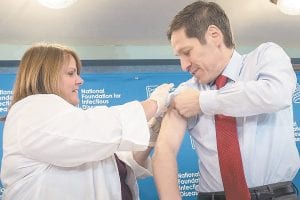 Dr. Thomas Frieden, director of the Centers for Disease Control and Prevention, received a flu shot from Sharon Bonadies at the conclusion of a news conference at the National Press Club in Washington. “Vaccination is the single most important step everyone 6 months of age and older can take to protect themselves and their families against influenza,” said Frieden. (AP Photo)

It’s time for flu vaccine again and while it’s important for the whole family, this year health officials have some different advice for different ages: Certain kids should opt for the ouchless nasal spray. Seniors, expect to get a new kind of pneumonia shot along with that flu jab.

And too many young and middle- age adults are skipping the vaccine altogether, says the Centers for Disease Control and Prevention — even though there are more options than ever.

“The best way to protect yourself against the flu is to get a flu vaccination,” said CDC Director Dr. Tom Frieden, who rolled up his sleeve and got his own flu shot for the season.

Some things to know about flu vaccinations:

WHO SHOULD BE VACCINATED

The government recommends a yearly flu vaccine for nearly everyone starting at 6 months of age. Yet only about half of Americans get one, a number Frieden called unfortunate. On average, the CDC estimates, flu kills about 24,000 Americans a year.

Vaccination rates last year were highest for children under 5 — 70 percent — and for seniors — 65 percent, the CDC said. But just a third of healthy adults ages 18 to 64 got vaccinated and, surprisingly, last year hospitalizations were highest among that age group.

About 55 percent of school-age children were vaccinated. Parents need to realize that flu vaccine is crucial even for otherwise healthy children, said Dr. Paul Offit of the Children’s Hospital of Philadelphia. At least 100 U.S. children died of flu last year, only half of whom had lung conditions or other illnesses that put them at high risk and most of whom weren’t vaccinated.

About half of pregnant women get vaccinated. The shot can be given during any trimester, and also protects the baby during the first few months of life, said obstetrician Dr. Laura Riley of Massachusetts General Hospital.

About 150 million doses are being shipped this year, with no signs of shortages or delays, Frieden said. About half will protect against four strains of influenza instead of the usual three, he said, as U.S. manufacturers move toward vaccines with that extra bit of protection. CDC doesn’t recommend one over the other.

WHICH KIND TO CHOOSE

For the first time this year, the CDC says the ouchless FluMist nasal spray version is the preferred vaccine for healthy children ages 2 to 8, after research showed it works a little better for them. But don’t wait if your doctor has only the shot — just get them vaccinated, said Dr. William Schaffner of Vanderbilt University and the National Foundation for Infectious Diseases.

FluMist also can be used by healthy people ages 2 through 49 who aren’t pregnant.

If a squirt up the nose isn’t for you, there are lots of other options: the regular shot; an egg-free shot for those allergic to eggs; a high-dose shot just for those 65 and older whose immune systems may need an extra boost; and a tiny-needle shot that just penetrates the skin. The Food and Drug Administration also recently approved a needle-free injector to deliver flu vaccine, although it’s not clear when it will be widely available.

This year, the CDC is urging people 65 and older to get a new kind of pneumonia vaccine along with their flu shot.

Children already receive Pfizer’s Prevnar-13 to prevent a kind of bacteria, called pneumococcus, that can cause pneumonia, meningitis and other infections. Now seniors need a one-time dose, too, Frieden said.

That’s in addition to a one-time dose of another long-used pneumonia vaccine, called a polysaccharide vaccine. The caveat: The two pneumonia shots have to be given at least six months apart. If you’ve had neither so far, get the new kind first — along with this year’s flu shot — and come back later for the second pneumonia vaccine, advised Schaffner. Together, the two pneumonia shots are expected to cut seniors’ risk of pneumococcal infection by 45 percent, and the chance of severe disease by 75 percent, he said.

WHEN TO GET VACCINATED

“Now’s the time,” Frieden said. It’s impossible to predict when flu will start spreading and it takes about two weeks for protection to kick in. Flu season typically peaks in January or February.

The vaccine is covered by insurance and Medicare, usually without a copay. For the uninsured, it can cost about $30, although Schaffner advised checking public health clinics for free or reduced-cost shots.