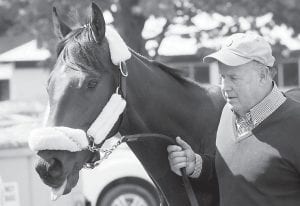 Kentucky Derby winner Orb arrived at Pimlico Race Course earlier this week and immediately settled into stall 40, reserved exclusively for the Derby winner. Many of the greatest horses in history have been kept in stall 40, including Secretariat (1973), Seattle Slew (1977) and Affirmed (1978).

“I can’t believe how proud I am,” trainer Shug McGaughey said.

Orb was shipped by van Monday after an outstanding workout at Belmont Park. With exercise rider Jennifer Patterson aboard, Orb seemed to move effortlessly around the track on a clear, sunny day. He breezed four furlongs in 47.18 seconds and galloped out five furlongs in 59.54.

“The way he worked this morning was nothing short of magnifi- cent,” McGaughey said. “I couldn’t be any happier where we are, and I’m very excited about Saturday afternoon.”

McGaughey figured it was better to have Orb in Baltimore early than late.

“I wanted to just get him down here, get him used to his surroundings,” the Hall of Fame trainer said. “I like to school him in the paddock, and I didn’t want to do too much at one time. So I thought we’d get him in here today, give him his off day (Tuesday) and then maybe we’ll train a little on Wednesday.”

For McGaughey, being the favorite in the Preakness is preferable to coming in as the long shot.

“I want to be the favorite every time I run,” he said. “Today, we’re standing up here with a little bit of a target on our back. I like that. If it doesn’t work on Saturday, that’s going to be just the way it is. I’ve been doing this quite a long time, and I know you win some and you lose some.”

McGaughey has never won a Preakness. The last time he tried was in 1989, when Kentucky Derby runner-up Easy Goer lost to Sunday Silence by a nose.

“Obviously, I’m here with the Derby winner so I’m a lot more at ease than when I came in that time,” he said.

A win in the 1-3/16-mile Preakness on Saturday would set up a Triple Crown try in the Belmont Stakes on June 8.

Orb, owned by the Phipps Stable and Stuart Janney III, takes a five-race winning streak into the Preakness, where he will face what look to be nine challengers. Among them are Derby runners Mylute (fifth), Oxbow (sixth), Will Take Charge (eighth), Itsmyluckyday (15th) and Goldencents. Also set for the race is Departing, winner of the Illinois Derby.

According to NBC, its May 4 coverage of the Derby drew 16.2 million viewers, making it the second most-watched Kentucky Derby since 1989. The viewership for the race was up nine percent from last year’s Derby (14.8 million) and up 12 percent from the Derby in 2011 (14.5 million).