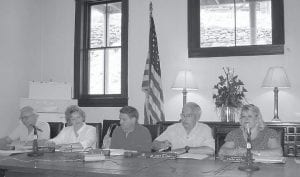 In what Mayor James Wiley Craft called a “red letter day,” the Whitesburg City Council voted unanimously May 11 to approve Ordinance 2007-4, a measure which formally legalizes the sale of alcoholic beverages in the city for the first time since shortly after the end of World War II.

The ordinance requires that sales be by the drink in restaurants with a seating capacity of 100. Participating restaurants must also earn at least 70 percent of their total income from the sale of food. Each drink containing alcohol will be taxed at a rate of six percent.

The city council’s action last week was made possible when city voters went to the polls on April 17 and approved a referendum calling for the restaurant-only sales by a vote of more than two to one.

“This is a red letter day for this city,” said Mayor Craft. “Because of the overwhelming vote of confidence, it is incumbent upon us to administer this in a good fashion.”

Last Friday’s vote came after Craft conducted the required second ordinance, which also creates an Alcoholic Beverage Control Office in the city and regulates how alcohol can be sold.

Craft emphasized several points as important in the ordinance, including a license fee of $1,000 and hours of sale set at between 6 a.m. until midnight Monday though Saturday, with no alcohol sales on Sunday. The ordinance says there can be no flashing neon signs advertising alcohol sales in restaurants.

Whitesburg’s ordinance is based in part on regulations adopted by the City of London. Craft said that city, which has similar limited alcohol sales, earned $95,000 in revenue last year from tax and license fees on alcohol sales.

Craft said the ABC administrator will have the ability to inspect the premises of any establishment serving alcohol to make certain the business is in compliance with city and state ordinances. He said he hopes to get those who will be serving alcoholic beverages into a state training program as soon as possible.

Whitesburg attorney James Asher, who worked with Craft in developing the ordinance, reminded Craft of two other points as well. Asher said the ordinance does allow for Sunday alcohol sales if News Year’s Day falls on Sunday and sets the closing time for New Year’s sales at 2 a.m. Asher, a former mayor of Whitesburg, said the city still needs to establish a business license for drivers of trucks delivering alcoholic beverages in the city. Mayor Craft said the council intends to address the entire issue of business licenses in the near future.

The ordinance officially becomes law today (Wednesday), when it is published in The Mountain Eagle, Letcher County’s newspaper of record.

The council also on May 11 passed the city budget for 2007- 08 and adopted Ordinance 2007- 5, which allows the city to hire a deputy fire chief for the Whitesburg Fire Department.

The Fiscal Year 2007-08 budget of $1,520,882 was also passed by unanimous vote. A separate $6,451,934 budget for construction of a new wastewater treatment facility in conjunction with the Letcher County Fiscal Court was also adopted by the council.

Craft also announced the retirement of Streets Supervisor Jerry Fields, who is retiring after 30 years of service. Craft said Fields has done a commendable job for the city and that the council wishes him well in his retirement.

The first reading of the alcoholic beverages ordinance was held at the council’s regular monthly meeting on May 8. Craft said the special meeting was needed to make sure the ordinance will go into effect in time to allow for potential servers to receive training through Kentucky’s Server Training in Alcohol Regulations program. The program, known as STAR, teaches servers how to detect fake IDs and determine when a customer has had too much to drink.

Craft said all licensees will have to meet not only state building codes but be in compliance with all local codes as well. When asked if this includes grease traps, Craft said it would.

“Above all else, this includes grease traps,” said Craft.

In other business last week, Matt Elliott of Summit Engineering reported presenting a checklist on the new wastewater treatment plant to the U.S. Department of Agriculture’s Rural Development agency for approval. Elliott told the council at some point, contractors will need a blanket easement from the city council to allow access to city sewer lines when construction begins. Franklin Vaughn, who had served as Summit’s representative to the project, has taken a position with the Veterans Administration.

In his report to the council for Veolia Water Company, Steve Taylor told the council he did not know of any further complaints about sewer odors on Maryland Drive. However, council member John Williams, who lives in the neighborhood, said he had received a complaint from a neighbor, although Williams said he had not smelled anything. Mayor Craft said he had visited the post office several times and had not detected any odor there, either.

Craft also reported that the city is in the process of borrowing a “clamshell” shovel from the Kentucky Department of Transportation to clear trash from bridge abutments.

Letcher County Director of Parks and Recreation Derek Barto presented bids for resurfacing the city tennis courts to the council. Barto recommended the council accept the bid from Tennis Trac Sports Services of Louisville for resurfacing, and Mountain Enterprises for laying the base pavement. The bids as presented exceeded the original approved cost by $6,700. Barto said the Department of Parks and Recreation would pay half the overage if the city would pay the other half.

Council member Williams asked if the court would be up to the standards set by the United States Tennis Association with the Tennis-Trac bid, and Barto said it would. The council voted unanimously to accept the bid and pay half the extra cost.

Williams told the council that Ozz Jackson, athletic director for Letcher County Schools, told him the city would be able to host the 14th Regional Tennis Tournament on a fairly regular basis with the resurfaced courts.

The council also voted to give part of the old railroad
bed in front of the former Suburban Motel/Cardinal Restaurant to the Letcher
County Health Department for a parking lot for the new building planned for the
site.