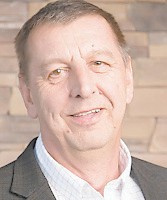 A longtime practitioner of accountability journalism, now making his weekly newspaper a model for investigative and enterprise reporting at the local level, is the winner of the 2018 Tom and Pat Gish Award from the Institute for Rural Journalism and Community Issues.

Leslie “Les” Zaitz, editor and publisher of the Malheur Enterprise in Vale, Oregon, accepted the award last Thursday during the annual conference of the International Society of Weekly Newspaper Editors in Portland.

His family bought the paper, which has a circulation of less than 2,000, to keep it from closing in 2015. In 2016, he became publisher after retiring from The Oregonian, where he had been the senior investigative reporter and winner of many awards, including finalist for the Pulitzer Prize for Explanatory Reporting in 2014 for a 2013 series about Mexican drug cartels in the U.S.

In 2017, the Enterprise pursued the story of a former state hospital patient’s involvement in two murders and an assault in Malheur County shortly after his release. The newspaper discovered that the defendant had been released after convincing state officials he had faked mental illness for 20 years to avoid prison, and after mental-health experts warned he was a danger. The state Psychiatric Security Review Board sued Zaitz and the Enterprise to avoid complying with an order to turn over exhibits that the board had considered before authorizing the man’s release.

Zaitz started a GoFundMe effort to pay legal fees, but then Gov. Kate Brown took the rare step of interceding in the case, ordering the lawsuit dropped and the records produced. Brown later named Zaitz one of three news-media representatives on the Oregon Public Records Advisory Council, which makes recommendations concerning the state public-records advocate.

The Enterprise’s efforts won Zaitz and his reporters, John Braese and Pat Caldwell, the 2018 Freedom of Information Award from Investigative Reporters and Editors. They beat out entries from much larger news outlets, including The Oregonian. The judges wrote that the series was a “classic David-meets-Goliath triumph,” and showed “You don’t need a large staff and deep resources to move the needle on open records.”

“That’s one reason Les Zaitz and the Enterprise are such a good choice for the Gish Award,” said Al Cross, director of the Institute for Rural Journalism and Community Issues, based at the University of Kentucky. “Doing good journalism in rural areas often requires more courage, tenacity and integrity than in cities, but the same state and federal laws apply, and Les knows how to use them for the public good.” The Institute publishes The Rural Blog.

The Enterprise is not Zaitz’s first foray into rural journalism. From 1987 to 2000, he was owner and publisher of the weekly Keizertimes in Keizer, Oregon. His family still owns the paper, which consistently wins journalism awards, and much of his investigative reporting has been in rural Oregon. He is a five-time solo winner of the Bruce Baer Award, Oregon’s top award for investigative reporting. In 2016, the Oregon Newspaper Publishers Association gave him its highest honor for career achievement, an award not given since 2010.

“Rural journalism is so critical to the American fiber, and even more so today when people are so hungry for a trusted news source,” Zaitz said. “Small news outlets don’t have to be bad news outlets, and I’m hoping our work in rural Oregon can in some modest way inspire others to redouble their efforts to provide quality journalism. That quality is not only a professional imperative, but a business one as well.”

The Tom and Pat Gish Award is named for the late couple who published The Mountain Eagle at Whitesburg, for more than 50 years and became nationally known for their battles for open records and the firebombing of their office by a Whitesburg policeman. Their son, Eagle Editor-Publisher Ben Gish, is on the award selection committee.

Past winners of the award have been the Gishes; the Ezzell family of The Canadian (Texas) Record; publisher Jim Prince and former publisher Stan Dearman of The Neshoba Democrat in Philadelphia, Miss.; Samantha Swindler, columnist for The Oregonian, for her work in rural Kentucky and Texas; Stanley Nelson and the Concordia Sentinel of Ferriday, La.; Jonathan and Susan Austin for their newspaper work in Yancey County, N.C.; the late Landon Wills of the McLean County News in western Kentucky; the Trapp family of the Rio Grande Sun in Española, N.M.; Ivan Foley of the Platte County Landmark in Platte City, Mo.; and the Cullen family of the Storm Lake Times in northwest Iowa.

Cross traveled to Portland last week to present the award to Zaitz. Nominations for the 2019 Gish Award may be emailed at any time to al.cross@uky.edu.