His death gives life to others 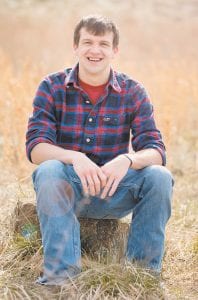 Letcher County native Jacob Lucas (above) died in a traffic accident in Clay County on August 16. The decision Lucas made when he was just 16 years old to become an organ donor has given new life to others who have been awaiting organ transplants, including a 23-year-old Perry County woman who has received Jacob’s heart. (Photo by Evelyn Sexton)

Jacob Lucas didn’t hesitate when faced with the decision of whether to sign up as a potential organ donor when he got his driver’s license at age 16.

Of course Jacob was going to — as the slogan for Kentucky’s organ donor program says — spare the few minutes of his life required to register as a donor so that he could possibly help add years to the lives of others.

Jacob had been interested in joining the organ donor’s program since he was old enough to learn the story of how his grandfather, Dan Lucas of Thornton, is alive today and still working as hard as thanks to a heart transplant operation nearly 20 years ago.

“He grew up knowing that,” said his aunt, Debra Lucas of Kona.

Because of Jacob’s decision, a 23-year-old Perry County woman was given a new lease on life earlier this week. Ariana Sumner, of Happy, was chosen to be the recipient of the heart Jacob donated when he died of blunt-force injuries he sustained in a traffic accident in Clay County on August 16. He was 21. 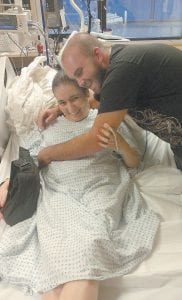 Ariana Sumner of Perry County shared a happy moment Monday with her boyfriend, Travis Sturgill of Letcher County, before Miss Sumner underwent a transplant operation at the UK Hospital in Lexington to receive the heart of organ donor Jacob Lucas, 21.

Jacob, a native of Thornton, had spent the last year living with his father Mitchell Lucas in Russell Springs, and was on his way back to Letcher County last Friday evening when the accident occurred when Jacob drove around a blind curve and hit an old Peterbilt tow truck that was stopped near a bridge con- struction site on the Hal Rogers Parkway near Manchester.

The pickup truck Jacob was driving caught fire, but construction workers were able to put out the flames with fire extinguishers. Jacob, who was not burned by the fire, was transported to a Manchester hospital by ambulance and then flown by helicopter to the University of Kentucky Hospital in Lexington, where he died Sunday night.

Jacob was only five weeks away from completing his training as a utility company lineman when the accident occurred. Because Jacob was a healthy man, several people have received his organs.

“He has saved so many lives,” said Debra Lucas.

Miss Sumner has been at the intensive care unit at the University of Kentucky hospital since April 26 waiting for a new heart. She had been suffering from the heart muscle deterioration disease cardiomyopathy, which resulted in her daughter, Baleigh Jayne, being stillborn in February. After staying in I.C.U. at the UK hospital from February until mid-March, Miss Sumner was home for two weeks but was flown back to the UK hospital in April.

The disease caused her to suffer a stroke and resulted in her being placed on life support numerous times. At one point, Miss Sumner completely lost her speech for a few weeks, said her boyfriend, Travis Sturgill, who grew up in Eolia and moved to Whitesburg at 13.

“ She is getting her speech back slowly,” said Sturgill, who works at Sykes in Hazard.

Sturgill said doctors told them that Miss Sumner couldn’t leave the hospital without having a heart transplant.

“ You learn the true meaning of patience by doing this,” said Sturgill.

A representative with the Kentucky Organ Donor Affiliates recently encouraged Miss Sumner to let WKYT-TV interview her for a story about her dire need for a heart transplant. As chance would have it, the segment aired on WKYT on Friday night.

On Sunday evening, Miss Sumner and Sturgill were told that the Lucas family wanted her to be the recipient of the heart donated by Jacob Lucas.

“They actually saw the story on the news and requested it to be given to her,” said Sturgill. “This is the day we have been waiting on for seven months to get her better and back to a normal life.”

Tests were quickly done to make sure blood types and tissues matched. The heart also had to be the right size for Miss Sumner’s body.

Doctors described Lucas’s heart as a “rocket engine” for his girlfriend, said Sturgill.

“They said it was 99 percent perfect for her,” said Sturgill. “They couldn’t ask for a better heart for her.”

In most cases donors remain anonymous, but in this case both families agreed to share information.

Sturgill was two years older than Lucas, but remembers him well from their days at Letcher County Central High School.

“He was fantastic,” said Sturgill. “I always described him as he would light up a dark room. If there was a dictionary definition of a positive outlook there would be a picture of him beside it.”

Sturgill said if there were 10 feet of snow on the ground Lucas would find the good in the situation.

“He was always laughing and joking,” said Sturgill.

Sturgill said it feels strange to have known the donor while also knowing the transplant wouldn’t have been possible if Jacob Lucas hadn’t signed his organ donor card.

“Jake will forever hold a place in my heart,” said Sturgill. “Even though he is no longer with us he will live on forever. Jake went out saving lives.”

After an 11-hour surgery at the UK hospital, Miss Sumner was back in ICU recovering Tuesday morning.

“She is doing fantastic,” said Sturgill.

Miss Sumner had issues with bleeding and high blood pressure during the surgery, but those problems are resolved, said Sturgill. She is expected to in the hospital for about two more weeks.

“It puts us back on the road to a normal life,” said Sturgill. “We actually get to go home and visit our daughter’s grave and see our dogs. He (Jacob) helped do that.”

Sturgill hopes to visit the Lucas family and thank them personally for saving Miss Sumner’s life.

Lucas had been attending the Lineman Tech Center at Somerset Community College.

“He was just one of those kids you will never forget,” said Debra Lucas. “He had the biggest heart. He lived life to the fullest.”

“He was always hanging out with friends and family,” said Debra Lucas. “He was just an all-around good guy.”

Debra Lucas said her nephew never met a stranger, adding that was apparent with the number of visitors who showed up at the hospital from Russell County.

“He had really touched their lives in one year,” said Debra Lucas. “They were truly hurt and it was amazing to see.”

Wilson Funeral Home in Russell Springs and Letcher Funeral Home will have charge of funeral arrangements, which were pending at press time.