Shawn Addington is honored as hero 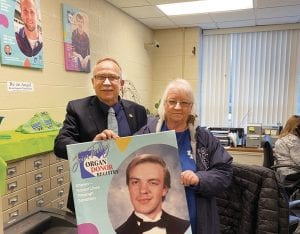 ORGAN DONOR HERO — Letcher Circuit Court Clerk Mike Watts and Ellen Addington, of Jenkins, hold a large image of Mrs. Addington’s late son, Eric Shawn Addington, whose organs were donated after he was killed in a traffic accident in 1997. The image has been added “Our Heroes” wall in the clerk’s office.

One of Letcher County’s early young organ and tissue donors has been added to the “Our Heroes” wall in the Letcher Circuit Court Clerk’s office.

A poster-size photograph of the late Eric Shawn Addington, formerly of Jenkins, was dedicated earlier this week during a courthouse ceremony attended by Shawn’s mother, Ellen Addington of Jenkins. Shawn Addington died November 29, 1997 in an automobile accident near the Pound Gap of Pine Mountain.

A 1995 graduate of Jenkins High School, Addington was only 21 years old at the time of his death. However, he had already taken a step to make sure his death didn’t occur without helping others — 50 of them in fact — when earlier in the 1990s he became one of the then-very-few Letcher County residents who had agreed to become an organ donor in the event of their deaths.

“Shawn lost his life in a tragic car accident years ago; however, his legacy and story did not end,” Letcher Circuit Court Clerk Mike Watts said before hanging Addington’s photograph on the wall. “Through the gift of tissue donation, Shawn went on to enhance the lives of over 50 people. Although Shawn may no longer be with us, his story continues on through others each day.”

Since taking office as circuit clerk in January 2019, Watts has made it his mission to bring the number of pledged organ and tissue donors in Letcher County from among the bottom of Kentucky’s 120 counties. Through the help of the Kentucky Circuit Court Clerks’ Trust for Life organization, Watts and his staff have so far added 1,085 names to the organ donors registry, raising the number of Letcher County donors in one year to 3,531 from 2,446. Watts and his assistants have also raised $1,402 for the Trust for Life organization through public donations at the circuit clerk’s office.

Watts said Ellen Addington credits her son’s decision to become a donor to his “love and selflessness toward others.”

“Shawn was a young man who was high-spirited and full of love for his friends and family,” Watts said. “When Shawn wasn’t out with friends, camping in the hills of eastern Kentucky, or being his normal or adventurous and independent self, he was surrounding himself with loved ones (and) truly enjoying life.”

Statewide, there are currently more than two million people registered as organ donors, and more than 99 percent of them joined the Kentucky Registry at their local circuit court clerk’s office. Currently, 953 Kentuckians are currently waiting for a life-saving transplant, while many more are in need of tissue and cornea transplants. Nationally, more than 113,000 people are awaiting a second chance at life through organ donation, and sadly 22 people die each day while waiting.