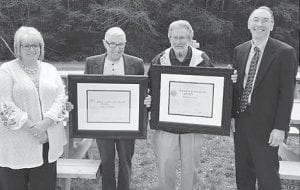 Hello again everyone! How is everything in your little corner of the world? As I have written before, grab a beverage and let’s sit and chat for a spell. This may be a tad bit long.

This morning as I walked out on my deck I could feel a bit of fall in the stillness of the morning. It is always so peaceful to look out over the park and see the lowhanging fog.

As some of you know already that I was able to attend the Osborne Brothers Homecoming Festival. This makes 25 years the festival has been going on.

Thanks to those who watched WYMT weather report. I have one question, are you sure your television is working properly? I was picked randomly to do the weather, but I really didn’t take it seriously. You might not have seen me.

I’ve only had the pleasure of attending this wonderful festival one time before. Before I go any further, a word of thanks to Dean Osborne for all his hard work, sleepless nights, and the endless days he devotes to a simple word called music. I met Dean Osborne about 20 ago. He left a great impression on me, as he was such a kind person. I still feel the same way. Dean hasn’t let the name or the fame change him down through the years.

Eastern Kentucky is very fortunate to have a festival that you can spend $15, and get three days of great music. This year was an exception as they added another evening, Wednesday, to the schedule, which I wasn’t able to attend.

Once again I turned into a Hippie Camping Granny as I packed my car complete with a bed that was more comfortable than some beds in motels. Thursday afternoon, I parked my car and never moved out of the parking place until Sunday morning when I was ready to head back home. I was close to the music area, bathrooms and everything I needed. I took water, a pail to sponge bath in, plenty of yogurt, pudding, crackers and peanut butter. I even lived dangerously and picked up a bag of cheese curls. I did get an order of the best potato wedges that I think I have ever eaten from the fire department that was selling food.

Larry Efaw & The Bluegrass Mountaineers performed two times on Thursday. It has been about six years since I’ve seen this band. For those of you who want strictly bluegrass music, check this band’s website. It was wonderful to see and hear Larry and the band again. I was invited to have supper with Larry and his wife Lisa on their bus. I declined as I explained the reason.

Now it must have really thrilled Larry Efaw seeing me again, as he must have gotten so excited he laid his mandolin down on the gazebo behind the stage and forgot to pick it up. He was very fortunate as John Rigsby, another great musician, found it and called Larry, who was on his way to Michigan to do another show. Larry told him to see if Charlie Hall, who performs with Southland Band, also a DJ out of Lexington, would get it and keep it until Larry’s daughter could bring it to him. I told Larry I would have gladly brought the mandolin to him.

Thursday night my niece, Sue Hall, along with her three nieces, Hannah, Kaya, and Izzy, joined me. Kaya and Izzy are three and five years old, and these little girls loved the music. I kept looking for Sue in the crowd as it was getting late, and as it turned out, Sue found me dancing to a good tune that Larry and the band played. I slipped off my socks and gym shoes and danced barefoot.

The music was great all three days. I saw several bands I’ve never seen before. Again, thanks to Dean Osborne for taking interest in young people.

Of course there was one special band I was looking forward to seeing, none other than Sunrise Ridge. Sunrise Ridge did a super job, although that was no surprise. I hope next year they are booked once again, and if God is willing, I will be there again.

Flo, thanks for joining me for a dance, and I am sorry I couldn’t finish the dance. When my heart starts beating 90 miles an hour and I am feeling pulsating in my lungs, it is time I sit myself down.

Saturday afternoon the Crossroads Band performed. There are a few members that I have known for about 20 years, and haven’t danced under them in quite a few years. Gene Thompson, Jeff Campbell, and Tweed Donahue are from northern Kentucky, and special guest Danny Davis is from Fairborn, Ohio.

Needless to say, when I saw Tweed Donahue turn around, I knew he was getting ready to pick claw hammer style. You better believe socks and gym shoes came off and my feet were saying hurry get your flats on. I didn’t care that I was the only one dancing, I waited just a little while as I know Rocky Island is a long strenuous dance tune.

For a few minutes I was in a world of my own. After the show I talked to Gene Thompson for a few minutes, and Gene told me it was so good to see me dancing. I laughed and said that being 73 years old, Gene shared his age with me. So I told Gene to keep picking and I would try to dance.

My feet don’t move as fast as they used to, but my brain says you can do it. My body says, who do you think you are fooling?

I will mention again, there are a few that are skeptical of hearing me talk about camping in my car at a bluegrass festival. In 1999, I bought a new Chevy Cavalier and it was my first experience of camping in my car with the seats laid down flat. I would put comforts in to pad it then sheets and a pillow, and pack a cooler with everything I need, and away I would go.

Then I was lucky enough to buy a van, which was lots more comfortable. I really don’t like this 2018 Hyundai, but the back seats fold down. I bought a DVD player which serves as a device to play my bluegrass music on, since the car has no CD player. I also took a couple of movies, which I enjoyed after the shows.

Saturday night I started feeling bad, so after Bobby Osborne’s show I decided to go to my car to rest and watch a movie. Somehow I lost my car keys. Earlier that afternoon I switched bags, to a smaller one. Needless to say, I panicked. Meantime a three-wheeled motorcycle stopped directly behind my car. While searching for my keys I became a little uneasy at the driver was just sitting there.

As I passed the cycle, I said, “Wish me luck, as I have lost my car keys.” The man replied, “What did you say?” I repeated myself and he said he had just found a set of keys and turned them in to Dean Osborne. I said please tell me they had a blue plastic loop and he replied, “Yes, Mam.”

I got cold chills up and down my arms and back. What was the chance of a stranger on a motorcycle parking directly behind my car, when the parking lot was filled with vehicles? Why mine?

I went to find Dean and recover my keys. Dean had announced on the speaker that someone had turned in a set of keys, and the only identification was a blue tag that had Superior Hyundai from Fairfield, Ohio. I didn’t hear the announcement, as I had stopped at the bathroom on my way to the car.

Thanks to whoever the stranger was who turned my keys. Thanks to Dean Osborne. The only thing is I knew I had an extra set, which I had removed from my purse, and they were here at home. It wouldn’t have done me any good to call a locksmith, except it would have given me a place to sleep.

I was thinking that my son Keith Ballard would have to drive to Hyden to bring my keys to me. I completely forgot that Sue Hall was in Dayton, and I know she would have been more than willing to bring my extra set of keys to me.

Again, I ponder the reason the stranger found my keys, and why he chose to park directly behind me.

Johnny and Ann Flo, I am sorry I couldn’t finish the dance, but when my heart starts beating 90 miles an hour and I am feeling pulsating in my lungs, it is time I sit myself down.

The twin preemies are doing wonderful. Their daughter Sue Wagner is back home in South Carolina for a few days, and then she will be back to her parents’ this week for more doctor appointments.

Johnny and Ann’s daughter Carol had surgery on her foot. Carol was in the hospital and had the surgery before she told Ann and Johnny about it.

Les and Pat Wagner are doing all right, Pat isn’t moving mountains but she is still improving.

Ike Adams, as I passed Berea and surrounding areas, I thought of you and Loretta. Of course I didn’t have your address with me, or I might have showed up at your door. Your garden is so beautiful.

I am very sad to know the Whitesburg Motel has closed, as this had become a second home to me since the passing of my brothers. Maybe someone will buy it and open it again.

Cody, thanks for all your help. I will miss everyone that was so nice to deal with.

I’ve been invited to stay with different ones, but I had rather be by myself. At least I do have another option, so I am looking forward to Blackey Days in October.

This was written many years ago: To a square dance in the mountains I’m longing to go, to hear a fiddle tune called Cotton Eyed Joe. As you hear instruction, bow to your partner, shake your corners, hand. You go around the circle in a right and left grand. All the calls, I don’t remember, a few I do recall. As you are spun around you get dizzy, hoping not to fall. You go around a couple, take a little peek, back in the center and swing your sweet, something about a birdie in a cage, the rest I don’t know, except when the bird hops out, in goes the crow. Then you promenade around and there’s a do si do. Oh yes to a square dance in the mountains, I’m longing to go. An old-time square dance is so much fun, you are filled with excitement when the dance is done. R. Ballard 8/6/2014.