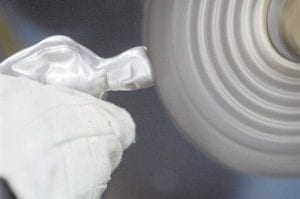 Eladio Gonzalez sanded and buffed Oscar #3453 at R.S. Owens & Company in Chicago. Like most Hollywood sagas, the story of Oscar 3453 begins with the transformation of a chunk of metal alloy into a 13-1/2-inch-tall statue at the factory where the statuettes have been made since 1983. (AP Photo)

One of the biggest stars of this year’s Academy Awards was born on Chicago’s northwest side, brought into the world by Martin Vega and prepped for his big close-up by Eladio Gonzalez.

Technically, his name is 3453, but he also goes by Oscar.

In a few weeks, he’ll be glistening onstage at the Kodak Theatre in Hollywood, clutched perhaps by a tearful Kate Winslet or an even tearier Mickey Rourke. They will grab him around his waist, hoist him into the air and thank everyone who helped mold their success — everyone, that is, except Vega and Gonzalez.

Like most Hollywood sagas, the story of Oscar 3453 begins with casting — in this case, the transformation of a chunk of metal alloy into a 13-1/2-inch-tall man whose behind, as the story goes, was once described by Bette Davis as resembling her first husband’s.

We’re on location at the R.S. Owens factory, a nondescript building on North Lynch Avenue, where the statuettes have been made since 1983. It’s Jan. 22, and coincidentally enough, this year’s Academy Award nominations were just announced in Beverly Hills. “The Curious Case of Benjamin Button” received a leading 13 nods, so who knows, maybe Oscar 3453 will end up with Brad Pitt or makeup artist Greg Cannom. 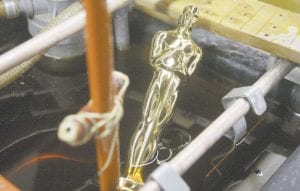 Oscar #3453 was pulled from the final plating process that coats the statue with 24 karat gold at R.S. Owens & Company on Monday (Jan. 26) in Chicago. (AP Photo/M. Spencer Green)

But right now, Vega, 40, focuses on his own artistry, as he melts bars made of britannia, a highgrade pewter alloy, in a casting tank. He then dips a ladle in the 780-degree liquid and slowly pours the molten liquid into a steel mold, one of just two ever made, the other now retired. The remaining mold is usually locked up in a safe, brought out only this time of year for the two or so days it takes to cast the 50 Oscars that will be shipped to Hollywood.

Vega tilts the mold slightly as he pours, so he fills the entire mold evenly.

That takes only 13 seconds, and it’s just over a minute more before he unclamps the top of the mold, hammers it a bit until the top pops off, revealing to the proud Vega the backside of an 8-1/2-pound Oscar.

“Not bad for an 81-year-old man,” says Owens sales manager and our escort for the day, Noreen Prohaska.

Vega takes out the still-hot statuette and lays it down next to seven others, which are all face up on a nearby table.

They cool for maybe an hour before some of the excess around the edges is cut off along with what resembles a piece of hose (think umbilical cord) protruding from the bottom where the molten alloy was poured into the mold.

From there it is taken to Gonzalez, 40, at the buffer machine. He smooths it with a sanding wheel about the size of a wheel on a kid’s wagon, taking off what is called flash, a raised edge that runs along Oscar where the pieces of the mold fit together. He then replaces that wheel with a slightly larger buffing wheel.

Every statuette is assigned a serial number, which is engraved in its base, to ensure that the Academy of Motion Picture Arts and Sciences can track each one, hence our subject’s very special birth name, 3453.

Engraver Louise White, 56, secures the Oscar, face down, the top of its head against a piece of rubber “so we don’t give him a headache,” she says. The numbers 3-4- 5-3 are lined up in a row on her engraving machine and White, a 36-year Owens veteran, uses what looks like a primitive dental drill to trace them.

That is connected to an industrial diamond stylus, which is pointed at the base of the Oscar and mimics the exact movements of the tracing instrument, only half as big. So, when she traces a ‘3’ with one hand, the stylus is moving in the same way.

Now Oscar 3453 must be cured, which is factory-speak for waiting long enough to make sure there are no air holes or cracks that might weaken it. A few days later it was bath time, as Nunzio Giganti fitted Oscar on a wire rack before dipping him into soapy water to clean him up a bit. Then it was a dip in liquid copper, nickel and then ever so quickly, silver.

Giganti blow dries him, using an air hose that looks and sounds like one used for tires at a gas station. Finally, comes every trophy’s dream — a dip in 24-karat gold in a tub used for Oscar and only Oscar.

Giganti then walks it over to the assembly area, where Bertha Fuentes screws on the brass-encased base, puts a plastic bag over Oscar’s head and puts it into a form-fitted foam box, which is then put into a cardboard box for shipping.

Early in February, Mr. 3453 will join his freshly-minted brothers on a journey taken by many a starstruck Midwesterner — a flight to Hollywood.