Oscar nominees share lunch, and some light and sober talk 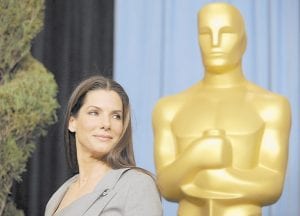 Sandra Bullock, an Academy Award nominee for Best Actress for her performance in “The Blind Side,” posed at the Academy Awards Nominees Luncheon in Beverly Hills, Calif., on Monday. (AP Photo)

This season’s Academy Awards elite gathered Monday for the annual nominees luncheon, with table talk ranging from weighty matters such as the war on terror to lighter chatter like what to wear to the big show.

Before sharing a meal of poached pear gorgonzola salad, marinated chicken breast and apple tarts, nominees dropped by a news conference to talk about the whirlwind leading to the March 7 Oscar ceremony.

Bullock has been considered the front-runner to win best actress for the football drama “The Blind Side” but said didn’t take her nomination for granted.

“Does anybody expect a nomination? I certainly didn’t,” said Bullock, an enduring box-office draw who had never before been nominated for an Oscar. “I’m really very amazed and thankful to be here, because I’d like to work hard for another 10, 15 years. So if this is what that means, bring it.”

Harrelson, a supporting-actor nominee for the homefront war drama “The Messenger,” and Jeremy Renner, a best-actor contender for the Iraq war saga “The Hurt Locker,” said their roles instilled fresh respect for troops fighting in Iraq and Afghanistan.

“I walk up to any military personnel I can find, and I shake their hand and I thank them for their service,” Renner said.

Before “The Messenger,” Harrelson said he generally had viewed the war and the troops fighting it in the same light.

“I always kind of lumped it all together, and it wasn’t until I had the opportunity through the shooting of ‘The Messenger’ to spend a lot of time with people in the Army that I started to realize how amazing these people are,” Harrelson said. “As much as I have come to love the warrior, I still loathe the war.”

Harrelson had a concise reply when asked if he ever expected to earn an Oscar nomination for a film released the same year he played a gleeful slayer of flesh-eating fiends in “Zombieland.”

Mulligan, a best-actress nominee for the British drama “An Education,” said awards season has been a thrill because of the Hollywood idols with whom she has rubbed elbows, including Bullock and fellow best-actress contenders Meryl Streep (“Julie & Julia”) and Helen Mirren (“The Last Station”).

“They’ve all been so unbelievably kind and not intimidating,” Mulligan said. “You have them on such a pedestal and you think they could be a nightmare if they wanted to because they’re so good. And they’re just lovely.”

Also among the idols she has met is Tarantino, a directing nominee for best-picture contender “Inglourious Basterds.” Moments earlier, Mulligan said, she and Tarantino had accidentally bumped butts while milling about among the luncheon crowd.

Bullock, Mulligan and Gabourey Sidibe, a best-actress nominee for the Harlem drama “Precious: Based on the Novel ‘Push’ By Sapphire,” said they have barely started to consider what to wear to the Oscars, one of the world’s top fashion bashes.

“It’s two weeks away, and my stomach’s hurting over it a little bit,” Sidibe said. “I’m a little scared.”

Contenders posed for the annual Oscar “class picture” — a group photo of all 121 nominees at the luncheon.

The crowd included ex-spouses Kathryn Bigelow, director of “The Hurt Locker,” and James Cameron, director of the sci-fi sensation “Avatar.” Though the best-picture field was doubled to 10 films this season, the contest for top prize is considered a two-movie race between “Avatar” and “The Hurt Locker.”

The Oscar show had its best TV ratings ever when Cameron’s blockbuster “Titanic” dominated the awards 12 years ago. Oscar organizers hope that having “Avatar” and hits such as “Up,” ‘’The Blind Side” and “District 9” in the mix will coax more viewers to tune in to a show that saw ratings fall to an all-time low two years ago.

“This year, it seems to be more lively, more interesting than it has been in a while,” Tom Sherak, president of the Academy of Motion Picture Arts and Sciences, told nominees during the luncheon.

Gyllenhaal, a supporting-actress nominee for “Crazy Heart,” said she got some valuable advice from brother Jake Gyllenhaal, a past nominee for “Brokeback Mountain,” about not letting the Oscars go to her head.