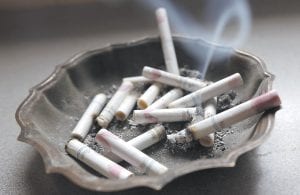 A government study released this week shows that even though fewer U.S. teens are smoking, exposure to secondhand smoke remains a big problem. Nearly half of nonsmoking kids in middle school and high school were exposed to secondhand tobacco smoke in 2013, and rates were even higher among smokers. (AP Photo)

Even though fewer U.S. teens are smoking, secondhand smoke remains a big problem for them, a government study found.

Nearly half of nonsmoking kids in middle school and high school encountered secondhand tobacco smoke in 2013, and rates were even higher among smokers.

Earlier studies on teens and secondhand smoke in specific places, such as cars or indoors, indicate that the problem has declined in recent years but the new research suggests it’s still affecting millions of kids.

“These findings are concerning because the U.S. Surgeon General has concluded that there is no safe level of secondhand smoke exposure,” said lead author Israel Agaku, a researcher at the Centers for Disease Control and Prevention,

The study results are based on a national survey of more than 17,000 middle school and high school kids. Exposure was defined as being around tobacco smoke at least once within the past week.

Nearly 1 in 4 nonsmokers who reported any exposure said they were around tobacco smoke daily. Settings included home, school, cars and public places. It’s not clear how many had only brief exposure.

The study was published online this week in the journal Pediatrics.

CDC data show that youth smoking has fallen steadily in recent years, reaching about 9 percent among high schoolers in 2014. At least 26 states have smoke-free laws affecting indoor public places and worksites, and more than 80 percent of U.S. homes have no-smoking rules.