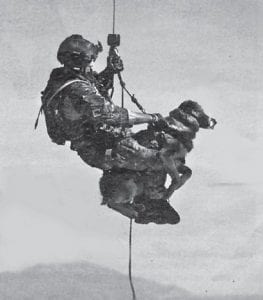 Our pararescue teams are much different than the Air Sea Rescue Squadron I was assigned to in the mid- 1940s.

They inherited the tactical explosive detection dogs less than five years ago. The dogs are trained to detect 14 different scents, including TNT, C4, homemade explosives and even detonation cord that could be wired to an improvised explosive device.

Just like people, some dogs are comfortable with helicopters, and some are not. Most of the dogs are skittish, so each handler brings the dogs near the helicopters to get them used to the sound prior to getting them in and out of the helicopter.

This exercise serves as familiarization training, not only for the dogs and their handlers, but pararescue men have never hoisted dogs into a helicopter before, so this was an experiment to see how the dogs would react to the sound of the helicopters and being in the air.

Military working dogs have been a valuable asset to the military since their first use in 1942, as the Army’s K-9 Corps. In today’s military, they have a variety of duties and hold military rank.