‘Our family is tied together with the love of music’ 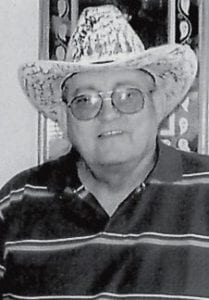 “Aaalll right” – that’s the familiar expression by Willard Hall each time he spins a record on “Scuttle Hole Gap Git Together” each Tuesday on WMMT radio, 88.7 on your F.M. dial, from the Appalshop studio in downtown Whitesburg. He’s been hosting the show going on 20 years now. His voice wafts across the airwaves as clear as a quart of Grandpa’s moonshine and as smooth as fresh run sorghum poured from a porcelain jug. Very few disc jockeys can match his longevity and his popularity. His dedication is especially impressive considering his work is all voluntary.

“Nary a cent do I get paid,” said Willard. “I do it because I love music and I love sharing the music with the thousands of listeners who call me and request their favorite music. My listeners know they can request bluegrass, gospel and ol’ time mountain music and I’ll try to find it in our library.

“I couldn’t do it without Weezie,” said Willard, referring to his constant companion, his wife Louise. “She answers the phone and writes me notes of the many requests and hustles around the studio hunting the CDs for me. Many times the callers want to talk to me personally and I try to do that too. My whole family is involved in music. My daughter Angie has been hosting ‘Bluegrass Express’ for 15 years and Little Willard hosts ‘Destiny’s Road’ on Sunday. Both of them are learning to play music, too. My stepson Jerry Stacy has a band called ‘Cold Trailin” and he plays bluegrass and ol’ time mountain music. He plays the claw hammer style of banjo and does the hard-driving bluegrass, too. Part of my show always includes the ol’ time claw hammer type music. I guess you could say our family is tied together with the love of music. Even Weezie likes to get out on the floor and do a little cloggin’ and flat footin’ occasionally.” 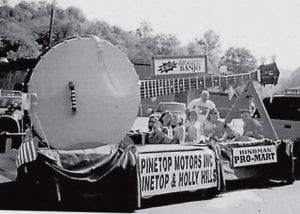 His daughter Angie recalled when she was a teenager. Her friends would call and try to get her to go out and ride around and listen to the radio. She knew their musical tastes were different from hers. When they would call, she would say, “Just a minute; let me ask Daddy.” She would yell, “Daddy, can I go out with my friends?” so the caller could hear her. At the same time she would mime to her dad, “say no,” and of course she got her request. “I didn’t want to go out with my friends and listen to country, rock or pop music. I wanted to stay home and listen to bluegrass music.”

Willard recalled that Angie’s love of bluegrass music was so strong she skipped her high school graduation ceremony so she could go to the Ralph Stanley Memorial Day Music Festival. She got her diploma anyway.

Willard recalls his early years growing up at Littcar in Knott County real near to where he lives today. “My dad loved to play guitar and sing,” said Willard, “and my mother hated music. They was as different as daylight and dark. Dad never met a stranger and my mom didn’t like to socialize. One time I told my mom, ‘I don’t see how you two ever lived with each other; you ain’t got a thing in common.’ Then, I realized that they had 15 children so I guess they had a lot in common. My dad was a veterinarian by profession but loved to play music. He played music on the same stage with Ralph and Carter Stanley when they was just gettin’ started back in the 1940’s. He gave it up, though, because my mom aggravated him so much he had to quit. I learned to play the banjo and guitar and sing and occasionally we would catch Mom gone and we would sit around and play music all day.

“Me and some of my brothers and cousins put together a band call the Hall Brothers and we played a few dances and such but it was mostly just for our own enjoyment. I haven’t played music since I lost some fingers in a hunting accident several years ago.

After attending school in Knott County, Willard went to Indiana to find employment. “There wasn’t much opportunity for employment here in the mountains and a lot of young boys were going north to hunt jobs,” said Willard. “I worked odd jobs there for a period but felt that I needed to better myself so I joined the National Guard. I tried to join the Marines but I was under age and my mother wouldn’t sign the papers so I lied about my age and joined the Army in 1957 anyway. I was stationed at Aberdeen, Md.; Fort Meade, Md.; and Fort Leonard Wood, Mo. After basic training and advanced training I was assigned to an ordnance outfit where they maintained and issued weapons, ammunitions and other military provisions. I later trained troops in the use of explosives. Through the ordeal I became shell-shocked and suffered nerve damage. Any loud, unexpected noise would cause panic. I received an honorable discharge in 1962. When I returned to civilian life I went back to Indiana. I worked as a bus driver in the Indianapolis area and also drove all over the United States. I later returned to Kentucky and worked for Goodyear Tire Company as a service man changing tires on heavy highway equipment. When I returned home to Knott County I worked as a police officer. In 1976 I was forced into retirement when I had a heart attack at the young age of 37. I was working as a guard at Alice Lloyd College at the time.”

Willard said when he was doing highway work, he was making good money and he took up an expensive hobby. He went to flying school and got his pilot’s license for light aircraft. He had gotten away from flying airplanes in recent years but still owns a small ultra light craft which can go about 30 miles per hour. It has a small engine that is just big enough to propel it on the ground. It has a rectangular parachute which measures about 40 feet by 12 feet which it drags behind it until the wind grabs it and lifts the craft off the ground. He frequently loads it on a trailer and takes it to the Pikeville Airport to fly.

“I could teach these young airplane pilots a few things about emergency landing,” said Willard.

Willard also has a few bragging rights: He owns the world’s biggest banjo, which he had made. It measures 19 feet long and 6 feet across the head. It is an exact replica of a real, playable banjo. Willard said he submitted the banjo for consideration in the Guinness Book of World Records but it was not accepted. They said it had to be playable and they didn’t reckon there was any giant in the world big enough to play it. He has several trophies where he entered it in parades.

He also has a big white hat that has been autographed by dozens of entertainers he has met. He said he was offered $4,000 for it last year at the Ralph Stanley festival, but he turned it down.

“This year the same feller offered me $5,000 for it and I turned it down again,” said Willard. “I ain’t got no reason to sell it; it’s just as valuable to me.”

Another thing he’s very proud of is being the master of ceremonies for the Ralph Stanley Memorial Day Festival. “I started doing this MC work when I was living in Indiana. I used to go down to Bean Blossom all the time and listen to Bill Monroe and the Bluegrass Boys. He and his brothers played music together then. One time I was sitting on the front row beside Bill and one of Bill’s brothers was on the stage doing the MC work. I told Bill that I believed that I could do that job. ‘What?’ said Bill. ‘If you’re serious, I’ll let you do it the next time I’m ready to go on.’ He liked my work and I did his MC work for him for a few years there at Bean Blossom until I moved back to Kentucky. I guess people just like my voice and my delivery. My experience with Bill Monroe gave me confidence so I went over and talked with Ralph Stanley about me doing the same work for him. I told him that if he didn’t like my work he didn’t have to pay me. I’ve been doing that for 32 years now so I guess he likes my work,” said Willard with a proud gleam in his eyes.

“I used to listen to Gary Rakes on WMMT,” said Willard. “He was the one who started the ‘Bluegrass Express’ show. Ralph Stanley had also hired him to advertise his festival. While Gary was at the festival I asked him if he would like to introduce a few bands. After that, Gary said, ‘I helped you out, now I want you to help me. I want you to come over to WMMT and help me to do the ‘Bluegrass Express’ show. You’re a good MC so you’ll be a good DJ too.’

“At the same time, Fiddlin’ Verlin Sanders was doing the ‘Scuttle Hole Gap Git Together’ but he wanted to quit so he would have more time for his real occupation. By then I had gained some experience and confidence and they asked me to take over that slot; I’ve been at it ever since. December will be 20 years since I started it. My daughter Angie helped me on the show and when Gary Rakes died she had some real good experience in the studio. She has been doing the ‘Bluegrass Express’ show for 15 years now.”

Willard’s love of music and his love of people doesn’t stop at the studio. He has a soundproof studio built at his home above his garage. He is promoting a group of young musicians know as Fast Lane.

“They come up to the studio and practice real often,” said Willard. “They’re mostly friends and neighbors; we treat ’em like our own kids. Weezie makes them cookies and they call her ‘Mom.’ They’re going to be cutting a CD real soon and they will include a couple songs I wrote: ‘Letters from Mother’, and ‘The Lonely Soldier’ and some other new material. They’re already getting some good bookings and I can see them growing musically from week to week. I’m real proud that I had something to do with their careers; I know they’re going to do well. They’ll be performing at the bluegrass music festival in Jenkins on Friday, July 13.”

Willard will be the master of ceremonies at the second annual Cumberland Mountain Bluegrass Music Festival on July the 13 and 14 at the Little Shepherd Amphitheatre in Jenkins. On Thursday night, July 12, the Country Gentleman, Ancil Trivette, will be the MC.