Our heritage from A to Z 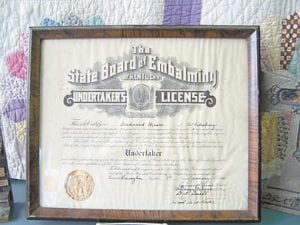 Everidge Funeral Home has loaned the Harry M. Caudill Library in Whitesburg a framed copy of a historic undertaker’s license issued to late Whitesburg Mayor Ferdinand Moore. The license sits directly above a poster featuring the word undertaker. At right is an exhibit of coal mining gear that is part of the same display expected to remain in place until November. (Photos by B.J. Johnson)

The staff at Harry M. Caudill Memorial Library in Whitesburg literally brought a book to life to celebrate Mountain Heritage.

The book is called “A is for Appalachia” and it was written by Eastern Kentucky University Professor Linda Hager Pack.

From A to Z, the book highlights words that are significant to the Appalachian region. For instance, C is for coal while Q stands for quilt. M is for mountain music and U is for undertaker.

Library workers Tessa Caudill and Legina Adams designed posters containing the prominent words and a brief description of their importance to southeastern Kentucky.

A pair of coal mining boots, a mandolin and a collection of baskets are just a few of the items showcased in the library’s window that complement the display.

Everidge Funeral Home donated a mortuary license that dates back to 1941.

“We really had a lot of fun putting it together,” said Caudill. “It took us about three weeks to finish it.” 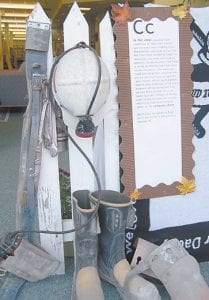 The display received a trophy after winning the Crowd Pleaser award for the 2012 Mountain Heritage Festival in the window display competition.

“We are so thrilled and very proud too,” said Angelina Tidal, the Director of Letcher County Public Libraries. 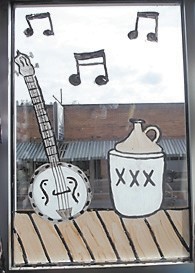 AT NEON — Artist Tazsha Hall, 20, painted this and other window murals still on display at the Neon library.