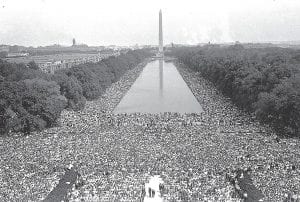 Crowds are shown in front of the Washington Monument during the March on Washington for civil rights held August 28, 1963. (AP Photo)

Fifty years ago this week — on August 28, 1963 — the Rev. Martin Luther King Jr. delivered his historic “I Have a Dream” speech before a crowd of more than 250,000 during the “March on Washington for Jobs and Freedom.”

The day after the Civil Rights march and King’s speech in our nation’s capital, Mountain Eagle editor and publisher Tom Gish wrote an editorial looking at where Letcher County stood in race relations in 1963. The editorial follows in its entirety:

In view of the Civil Rights march on Washington it might be well to take a look at where Letcher County stands in the matter of extending freedoms to its Negro brothers.

The fact is that much progress is being made from day to day in the field of race relations, although surprisingly we lag far behind the rest of Kentucky in one important aspect.

An incident of this past Monday illustrates just how far Letcher County has gone in the field of integration. A very large truck, driven by two neatly uniformed Negroes, parked in downtown Whitesburg, and the driver and his assistant went up the street to the Coffey House. They entered; they were seated prominently in a dining room otherwise packed to overflowing with white customers. They ordered a chicken dinner, they ate, and they paid their bill, left the restaurant, went back to their truck and continued their trip. There was no trouble. The truckers were treated with courtesy and respect, and in turn responded with a display of politeness. The truck, incidentally, was from North Carolina.

The incident happened, at the height of the noon hour and the restaurant was filled with a good, crosssection of Whitesburg residents. Not a single one walked out, nor was there any protests.

The quiet event was an important milestone, for it marked the integration of one of the oldest and best-known and most important public eating places in all of eastern Kentucky. The restaurant owners, Mr. and Mrs. Fred Coffey and Mr. and Mrs. Cossie Quillen, are to be congratulated. Their calm good sense of fair play accomplished integration in an important segment of life in the mountains of Kentucky, and the community did not have to pay the terrible price of sit-down strikes, marches, fire hoses, dogs and other violence that has accompanied similar integration developments elsewhere.

Carita’s Cafe, in Jenkins, met a similar integration effort a few weeks ago when a large group of Jenkins Negroes entered, ordered food and were served, without incident. Like the Coffey House, Carita’s Cafe is one of the better and more important in eastern Kentucky and its operator deserves recognition for the good sense she has displayed.

Letcher County has had integrated hospital facilities ever since the opening of Whitesburg Memorial Hospital seven years ago. The hospital cafeteria has been integrated, the hospital staff is integrated, and more importantly, patient care is integrated. The hospital has not restricted its job openings for Negroes to only the lowest-paying positions but regularly has employed Negroes as nurses and in other skilled and well paying positions. If there has ever been any deliberate slighting of the Negro by the institution, we have never heard of it.

Letcher County for many, many years has provided jobs for Negroes in coal mines under the same wages and working conditions extended to white miners. In our coal camps we have provided equal housing for the Negro miners, with Negroes and whites frequently living next door to each other and even on occasion in the same duplex apartment building. And there never has been much more than a minimum of friction between the two races in the mining towns, usually no more than the kind of disputes that even the best of neighbors sometimes have.

In the field of communication, The Mountain Eagle follows a policy of equal treatment. We avoid use of the word “Negro” except where it is important to the story and do not use the word in reporting such things as indictments, trials, social notes, etc. We also devote equal space to such things as engagements and wedding announcements and pictures and make no distinction between the two races.

Letcher County is lagging in one important aspect of integration. No Negroes have yet been integrated into the Letcher County and Jenkins public school systems. Letcher County continues to operate a small segregated one-room school for Negro grade school pupils at Fleming, while Jenkins continues with a fully segregated system. County Superintendent of Schools Sanford Adams said the county has no policy of segregation but has attempted to follow the wishes of the Negro community, which seemingly prefers segregated schools. There has been no request for integration from members of the Negro community, Adams said.

Neither, the state nor local government in the county has hired any Negroes, so far as we know, despite an order from Governor Combs directing equal opportunities.

All in all, Letcher County residents need feel no particular sense of shame on the subject of integration. We quietly have made great progress over the years greater, in fact, than in almost any other section of the country, particularly in the fields of housing, employment and medical facilities.

And if the Negro head of the household in Letcher County today finds it difficult to obtain employment, if he finds it hard to feed and clothe and educate his children, he simply is sharing a problem with many, many thousands of white households throughout the area. All of us in eastern Kentucky share the common problem of survival in an age, which has left us behind, Negro and white alike.