Our Post-It Picasso makes his creations in Cynthiana 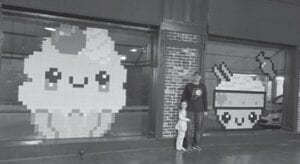 Tyler Watts and his daughter Lilah with his latest creation in Cynthiana.

Well, our hometown Post-It Picasso has gone on to other cities now with his creations. This week he was in Cynthiana putting up his display on the windows of a bakery opening up there. I can’t wait to see where this takes him and his talent.

I hope everybody that wanted a white Christmas is tickled over all the snow we had. My brother Albert was here for Christmas and he loved it for sure. I DON’T LIKE IT!!!

Did you notice how many people fell and broke bones because of all that ice and snow? Whether I have somewhere to go or not, I don’t like looking out and seeing roads I’m afraid to travel. The pictures that were posted on social media were beautiful, but the dangers outweigh the beauty in my book. Some people had no power because of it and so the linemen had to work on Christmas Eve and Christmas Day. The road crews had to be called out to work also. Not to mention the craziness that goes on in the stores before the storm hits. Like people can’t go two or three days without milk or bread. 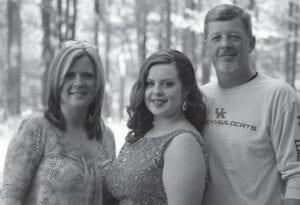 Tim Seals celebrated his birthday on Monday the 28th. He is shown here with his wife Kim and his daughter MaKayla Hope Seals.

Marlowe Coal Camp lost another one of its former residents. Paul David Banks passed away on Monday the 28th. His sister, Zella Banks Le Vangie, posted this message on our Growing Up In Marlowe Coal Camp Facebook page.

“Dear Marlowe Friends. It is with a heavy heart and deep sadness that I’m writing this post to request prayers for my family. My youngest brother, Paul David, fell victim to the COVID virus. He passed at 3:47 a.m. on Monday morning. He was an amazing husband, father, grandfather, and human being. He will be greatly missed by all of us. Please keep us all in your prayers.”

Another Marlowe resident and one of Mom’s good friends, Bertha Paige Dye, called her this past week and wanted to let her know one of her great-grandsons had passed away. He was only one year and eleven months old and swallowed a button battery that caused complications. His name was Johnathan Gabriel Huff. They live in Greensboro, N.C. Bertha wanted me to make sure everyone was aware of what these batteries could do if a child swallowed one. They requested that everyone remember all the family in your prayers. 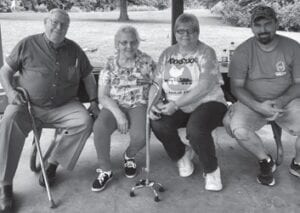 Our county is still being hit hard by COVID-19. Once again, today there were many calls on Millstone Missionary Baptist’s prayer line for people with this virus. Johnny and Judy Howard Greene are still suffering. Both were admitted to the hospital in Tennessee with pneumonia and Judy is doing better, but as of Monday, Johnny is now on a ventilator. June Craft was released from the hospital and is now back at Letcher Manor. Do remember, also, to pray for the residents of the nursing homes.

Some others that need our prayers are Charles Howard who fell and broke his shoulder. Starla Holbrook fell and broke her leg. Lonnie Johnson Baker is having problems with her legs and I have a very special unspoken for my family.

Once again there were many birthdays this past week. Jesse Bates on the 23rd. Jim Hall on the 26th. Shirley Standifer Day on the 27th. Connie Holbrook, Victoria Bates, Tim Seals, Callie Horn Blair, Annette Yonts, and Gurt Cook on the 28th. Chasity Holbrook, Mackinzie Cook, and Juanita Collins on the 29th. Mason Outlaw and Natasha Baker Campbell on the 30th, and Ginger Isaac, Kristy Taylor Stewart, Faye Mullins, and Teresa Branham on the 31st. Bruce and Linda Sturgill celebrated their wedding anniversary this past week, I’m not sure what day it was but their 55th anniversary. 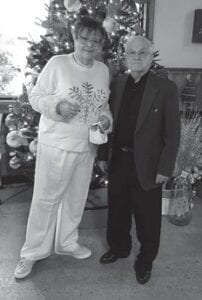 Bruce and Linda Sturgill celebrated their 55th wedding anniversary this past week with their family at Pine Mountain Grill.

We got news today that the man who was charged with the murders of our pastor Bill Jones’s son Bobby Jones and his girlfriend Crystal Watson died with COVID-19 Monday morning. Court was scheduled to begin in January and Sandy Jones, Bobby’s mother, was asking the church to pray that he would take the deal of life in prison without it having to go through a trial. So, be that as it may, we no longer have to pray for that to happen. I’ll just leave it at that.

Remember to try to be in church Sunday. I know it’s hard, but I promise we are following all the rules at Letcher Independent Baptist Church.