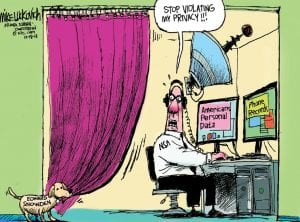 Last week, a guard insisted on looking into my handbag as I entered Radio City Music Hall to see the Christmas Spectacular. He had absolutely no reason to suspect me or the hundreds of other patrons whose bags he similarly inspected of carrying guns or explosives. But none of us objected to the incursion.

Speaking for myself, I didn’t want to get blown up by a terrorist or other psychopath bent on mayhem in this iconic and people-packed venue. A minor invasion of my handbag seemed a fair trade-off.

Finding a proper balance between security and privacy is no easy task. And Federal District Court Judge Richard J. Leon did not make progress in his attack on the National Security Agency program of collecting Americans’ phone call records. In the ruling, Leon held that founding father James Madison would have been “aghast” at the government’s alleged encroachment on liberty. He must have one powerful Ouija board.

In ordering the government to stop collecting phone data of the two plaintiffs in the case, Leon handed fundraising ammo to the various fringe interests pushing the public’s hysteria buttons for their own advancement.

It happens that a higher legal source, the Supreme Court, decided in 1979 that the public should have no expectation of privacy on their telephone “metadata.” After all, the phone company has this information. Metadata refers to the numbers dialed and length of calls — not what is said.

Leon’s logic was not universally admired. “Smith v. Maryland is the law of the land,” remarked David Rivkin, a lawyer in the former President George H.W. Bush’s White House. “It is not for a district court judge to question the validity of a Supreme Court precedent that is exactly on point.”

Leon oddly argued that the Court didn’t foresee the age of massive mobile phone use or that government computers would hold onto the metadata for five whole years. This may be so, but phone companies still have this information, so what should our expectation of privacy be?

Yes, the surveillance program does sound creepy. But in fact, these are computers shuffling the data for worrisome patterns. Humans can’t peak at the content without a court order.

When it was revealed that the NSA was spying on foreign allies, such as German Chancellor Angela Merkel, several leaders cried foul. Note that their U.N. resolution protesting such surveillance is largely symbolic.

It’s common knowledge that the Chinese, Russians and terrorist groups, among others, observe no niceties over privacy. Those not fully engaged in the war for information risk both economic and physical attack.

The lead plaintiff in Leon’s case was Larry Klayman, a rightwinger known to call Obama and his backers “wildly ultra-leftist, atheist, anti-Judeo-Christian, antiwhite and Muslim.” That’s when he’s feeling diplomatic.

Seeking to share the “glory” from way-out-left is Glenn Greenwald, chief promoter of NSA leaker Edward Snowden. Greenwald’s bankroller happens to be PayPal tycoon Pierre Omidyar, whose company, it turns out, has also been handing its data over to the NSA. A more worldly and opposite view of these activities comes from Omidyar’s co-founder at PayPal, Max Levchin. Conceding on the “Charlie Rose Show” that the data collection seems “unpleasant,” “intrusive” and “controversial,” Levchin said that compromises must be made in the name of national security.

The foreign-born Levchin further noted that having lived under Russian domination, he regards the U.S. government’s intentions as essentially benign.

“ National Security is just not to be trifled with,” Levchin added. “We’ve seen what happened on Sept. 11, and I think people who forget that are fooling themselves.” One suspects most Americans would agree with him.