By JENNIE REES
The Courier-Journal 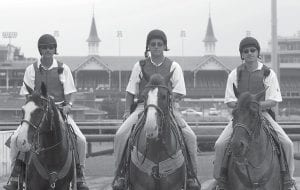 Not long after Greg Blasi sprinted on foot after a filly who fell over the outer rail, crashed into the box seats and ran underneath the grandstand one morning, the siren sounded the warning of a loose horse on the track.

The riderless horse was heading up the backstretch at full speed against oncoming traffic on the outside of the track.

Blasi, Churchill Downs’ lead outrider, was back on his pony after the earlier melee. He immediately began instructing exercise riders to turn in the same direction the horse was running — there’s likely less damage if a horse runs into the back of another, rather than head-on — and to move toward the inside of the track. He asked a veteran horsewoman to position her pony just off an opening to the track — known as a “gap” — to discourage the horse from exiting to the backside at high speed.

Then Blasi and his 11-year-old pony Pete picked up the chase, coming at an angle to where the outrider caught the horse by the reins left-handed on a dead run before it could reach another exit gap.

Just another day for an outrider.

“They’re ready for anything,” he said. “Even chasing one through the clubhouse.”

Two outriders are on duty each morning at the Downs during training hours, and all three are at the track in the afternoon on race days. (A fourth outrider, Dorothea Gilliland, works at Trackside training center in the mornings.)

Blasi — the husband of trainer Helen Pitts-Blasi and the brother of Scott Blasi, who runs trainer Steve Asmussen’s Churchill division — took over Churchill’s lead outrider spot when John Neal left for Keeneland in 2006. Lockwood, a veteran exercise rider and assistant trainer, took over Blasi’s spot as the other outrider with year-round employment by Churchill. Brasseaux, an outrider for 18 years at other tracks, is in his third meet here.

In a typical Churchill race, Blasi leads and Lockwood anchors the field as it comes out of the paddock and through the post parade, with Brasseaux positioned on the backstretch. Where Blasi and Lockwood situate themselves during a race depends on its distance, but one always starts out in front and one behind the starting gate.

If a horse gets loose during pre-race warmups or while being loaded into the starting gate, it’s up to the outriders to collar him. If they can catch a loose horse promptly, it can not only prevent an injury, but also a potential scratch.

Churchill paddock judge Sue Brewster said Blasi and Lockwood routinely defuse potential problems in the paddock before races. “They stop more trouble before you even see it coming,” she said.

Asher said the outriders also act as goodwill ambassadors, routinely positioning their ponies in the paddock between races so children can pet their noses and fans can get pictures taken.

“They help us on a lot of levels, not only on the highest professional end, but also just being warm and fuzzy with anybody who comes by,” he said.

Warm and fuzzy aside, it’s not a job for the fainthearted.

“A horse in the paddock that froze up and flipped over, a lot of people are running to get out of the way,” Lockwood said. “We’re trying to grab a hold of it or hold it down. When everyone else is running from the fire, we’re running toward it.”

The outriders enforce the rules of the track, no matter how awkward — for instance, telling Hall of Fame trainers D.Wayne Lukas (in cowboy hat) or Bill Mott (ballcap) they’ve got to wear helmets on the track.

They have to scold those who gallop horses on the rail, the lanes reserved for faster workouts. Or tell a trainer with a green 2-yearold to bring it out late in the morning next time, when there are fewer horses.

They help riders who can’t stop their horses, help get obstinate horses on the track and rear horses safely off .

Outriders can refer rule violators to the stewards for potential fines or even suspensions. They also can deem a horse or rider unsafe to be on the track.

“The job they have with the danger involved in the safety for other people, they don’t get the respect they need and deserve,” said former trainer Bob DeSensi, now a “gap” attendant who tells clockers what horses are coming on the track for workouts.

Shoulder, knee and groin injuries are an occupational hazard. While the preferred practice at some tracks is to get loose horses to run off the track, the Churchill outriders say they want to make the catch because horses can get hurt skidding on the pavement or running into something.

Lockwood said he once had to catch a horse by its ear. Brasseaux said you learn to read horses.

“If his ears are pinned back, he’s not going to duck you,” he said. “Some of them will come with their ears at you, and they’re looking at you — they’re probably going to give you a problem catching them.”

So what’s it like to run down a loose horse running into traffic?

Blasi puts it this way: “Go get on the Watterson Expressway on the wrong side and go about 35 miles an hour into oncoming traffic and see if that doesn’t make your heart jump up in your throat.”