By TIFFANY ARNOLD
The Herald-Mail of Hagerstown 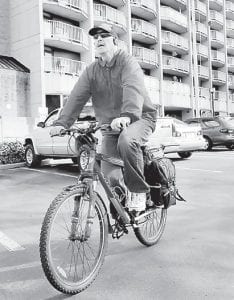 Roger Elliott bikes 5 miles each way to work in Maugansville, Md., from his apartment in Hagerstown. He has survived four strokes before he turned 40. (AP Photo/The Herald Mail)

Roger Elliott was home alone Christmas Day when he had his first stroke.

But because of a rare untreatable genetic illness, it wouldn’t be Elliott’s last stroke. He has survived four strokes before he turned 40.

“I have moyamoya,” said Elliott, who’s now 41 and living in Potomac Towers in Hagerstown.

People with moyamoya disease have malformed blood vessels, making them more susceptible to strokes, said Dr. Marian LaMonte, who’s chief of neurology at Saint Agnes Hospital Center in Baltimore and oversees Elliott’s case. The strokes have impaired Elliott’s motor skills. His speech is slow and he has limited use of his left side. LaMonte said it’s a hard diagnosis for most patients to accept.

“They give up, they get depressed,” she said. “They wait on disability. They sit at home and don’t exercise. They die young.”

“That’s what why Roger’s so amazing,” LaMonte said.

Elliott’s story is one of triumph.

Since the diagnosis, Elliott has been focusing on other aspects of his well-being, nurturing his mind, body and his spirituality.

Elliott works as a janitor in Maugansville. He bikes five miles to and from work each day on his mountain bike. He has nearly 2,000 miles on the bike since he bought it in November 2008 — it is bike No. 3.

Before his first stroke, Elliott said he was healthy and worked as a truck driver.

“I wanted to drive trucks since I was a kid,” Elliott said.

The career had taken him through 47 states in the continental United States and three Canadian provinces over a span of five years. He earned 28-cents to the mile and averaged 3,200 miles a week.

“It was good money,” Elliott said.

But his trucking days ended Christmas Day in 1997. He said he remembered suddenly feeling funny.

“I lost the use of my left side,” Elliott recalled.

Since he regained feeling on his left side after 10 minutes, he said he ignored it.

“I went back to watching TV,” Elliott said.

His second stroke came the next day. Only this time, he had to be hospitalized.

Elliott said he remembered being in an ambulance and waking up in a hospital days later.

LaMonte explained that the second stroke was a hemorrhagic stroke — the most severe.

“A third to half of the people will die,” she said of hemmorrhagic strokes.

For Elliott, the stroke temporarily impaired his speech and temporarily paralyzed the left side of his body.

Elliott regained his motor skills and speech after the strokes in 1997.

In 1998, he was diagnosed with moyamoya, LaMonte said.

“It was just like any other day,” Elliott said, describing his reaction to learning he had moyamoya.

Still, the series of strokes had a profound affect. Elliott had a high school diploma, but now had to look for something else to do.

“I realized my education was lacking,” Elliott said. “My disease wouldn’t let me go back to driving trucks.”

He started tinkering with computers.

Over time and through a process of trial and error, Elliott learned how to build computers.

In his spare time, he flies and designs aircraft from his own hand-built computer system, nicknamed “the battle cruiser” by his friends. Using a joystick and pedals similar to what you’d find in an actual plane’s cockpit, he flies above Washington County, in and out of Hagerstown’s airport, using flight simulation programs. Three, wide-screen computer monitors cover the span of his desktop.

The third time Elliott had a stroke was in the last day of February in 2002.

Elliott, a security guard at a time, was in his office when he couldn’t feel his right side.

“I leaned up against the desk and the wall,” Elliott said, recalling that his thought at the time was, “not again.”

He lost his job as a security guard because the stroke affected his speech, motor skills and slowed his reaction time.

“The third stroke took it again and didn’t give it back,” Elliott said.

In the spring of 2002, Elliott said he went back to church. He now attends Bridge of Life Church in downtown Hagerstown.

“Roger is amazing,” said friend Bill Sprague, who attends church with Elliott. “We’re proud of him.”

Sprague said the two of them used to make the rounds delivering food back when Elliott was in charge of the church’s food pantry. Sprague drove the truck and Elliott delivered the goods, often lifting and carrying the boxes with one hand.

In September 2002 Elliott had his fourth stroke. He was at home.

“I felt strange,” Elliott said. Then he fell over.

Elliott hasn’t had any strokes since 2002.

“It doesn’t fix the moyamoya,” LaMonte said. “This surgery outsmarts it.”

In the procedure, a portion of Elliott’s skull was removed and a large artery in his skin was “flipped” and sewed into his brain, LaMonte explained. The vessels then “grow” into the brain, she said.

LaMonte said this is what makes Elliott “one in a million.”

“He’s such an inspiration, an against-all-odds type of guy,” she said. “He could have more strokes until he dies. He survived surgery, (and) the deadliest kind of stroke. He’s really something else. He could be anyone’s inspiration.”

In 2004, Elliott received the Special Recognition Award at the 2004 Washington County’s Most Wonderful Citizens ceremony.

Elliott recently gave up his role as the head of his church’s food pantry.

Elliott said he did this so he could focus his attention on going back to school, he wants to take courses at Hagerstown Community College.

“I want to learn everything I can about computers,” Elliott said.