Are they the new U.S. Steel, Bethlehem? 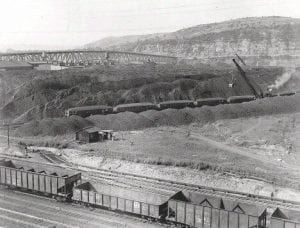 In this June 29, 1935 file photo, part of one million tons of coal which had been prepared for a bituminous strike is shown at the Clariton plant of the Carnegie Steel Company in Clariton, Pa. (AP photo)

It has been more than a century since J.P. Morgan, Andrew Carnegie and other U.S. steel barons built mining empires that dominated life across wide swaths of Central Appalachia’s coalfields, securing essential fuel for their mills.

Bits of that history are starting to repeat themselves. Decades after tough economic times forced steel makers to abandon company towns and sell their coal mines, 21st century steelmakers are back in the hunt for coal.

This time, rather than the Carnegies and Morgans, it is the Mittals and the Mordashovs.

Absent from a global buying spree are the U.S. companies that wrote the book on owning everything from the commodities used to make steel to the finished product, such as Bethlehem Steel Co.’s massive shipbuilding operations.

The U.S. steel industry, badly damaged from plummeting steel prices and legacy costs, spun off coal operations years ago and have been more hesitant, or do not have the billions, to spend locking up coal again.

“I bet you they wished right now that they still had the coal mines,” said Charles Bradford, an industry analyst with Bradford Research/Soleil Securities.

That torch, however, has been passed overseas.

Luxembourg-based ArcelorMittal, the world’s largest steel producer, recently upped its stake in Australia’s Macarthur Coal, supplier of more than onethird of the world’s pulverized coal. At the same time, ArcelorMittal was snapping up Mid Vol Coal Croup, a virtually unknown American company with 85 million tons of reserves and mines producing some 1.5 million tons of coal in West Virginia and Virginia. Terms have not been disclosed.

International mining conglomerate BHP Billiton Ltd. is attempting a $170 billion takeover of rival London-based Rio Tinto Inc., a deal that would combine the world’s No. 2 and No. 3 iron ore miners. That buyout has come under European Union scrutiny because of a potential monopoly that could control the global prices of iron and coking coal.

The price of the U.S. coal used to make the coke that fuels the blast furnaces can go for as much as $250 a ton. Just last year, the cost was closer to $90.

Steelmakers already face pressure from customers – manufacturers that make everything from automobiles and aircraft to washing machines and refrigerators. Steel producers are doing everything they can to control soaring prices for iron ore, metallurgical coal and scrap steel.

“Obviously everybody wants to have their own low-cost materials,” Bradford said.

The U.S. steel industry was seriously wounded over the past two decades, as labor costs and inefficiencies dragging down profits and shuttering dozens of mills from Johnstown, Pennsylvania, to Cleveland.

Even U.S. Steel, which signed a historic deal with union workers several years ago and had done better than survive, has not announced any coal acquisitions.

The Pittsburgh company did hold onto substantial coking operations, an enormous boost in the current skyrocketing commodities climate.

“We continue to look at strategic opportunities related to our business, but we don’t comment on them until it’s appropriate to do so,” spokesman John Armstrong said.

Steelmakers overseas, however, are taking a page from the playbook of U.S. producers of yesteryear.

Nearly 100 years ago, giants such as Pennsylvania’s Bethlehem Steel controlled everything from the coal coming out of the ground, to the towns where miners lived, and some even dominated industry in finished products.

By mid-century, Bethlehem had four massive shipyards and was a major player in the shipbuilding industry.

Bethlehem declared bankruptcy in 2001, and two years later it was dissolved and sold off to International Steel Group. Those assets were snapped up by ArcelorMittal.

In sheer mass, none rivaled U.S. Steel, which arrived in southern West Virginia at the start of the 20th century.

The company started building the McDowell County town of Gary – named for founding Chairman Elbert H. Gary – in 1901. Over time, one company town became 12 company towns, all connected by a network of roads and rail spurs.

U.S. Steel produced some 200 million tons of coal from its West Virginia operations, and the company did the same thing in eastern Kentucky. It sold the last vestiges of its mining operations in 2003, but hasn’t spoken publicly about returning to the industry.

There has been no overt shifts back to the coal fields in the United States.

As a group, their American counterparts have spent much of the past decade just trying to survive, much less expand. Dozens of companies went bankrupt and closed, their remnants divided up by international conglomerates and pared down smaller, leaner operations.

Many have also shifted to electric furnaces, using scrap metal rather than coke-fired furnaces and iron ore, Bradford said.

To Bradford, only time will tell whether ArcelorMittal and other big steel players are making savvy business decisions or setting themselves up for the same fate that befell U.S. Steel’s once thriving coal operations.

“Near term it probably means jobs because you don’t want to buy something except to operate it. More likely than not to justify the prices paid, they’ll want to increase the output,” he said. “But the risk also goes up if there’s a downturn.”