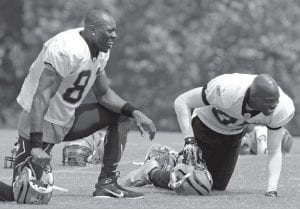 Call it training camp with a twist: plenty of old faces in new places this summer, all looking for fresh starts.

It’s making for some strange sights around the NFL, starting with — it’s still weird to see in print — Washington Redskins quarterback Donovan McNabb.

“Obviously, this is a diff erent change from what I’m used to,” said McNabb, who went from Philadelphia to flinging footballs for a team he once loved to beat. “But there are days in life you go through change and find out sometimes there’s a positive light on the other side of the tunnel.”

Jason Taylor is also behind enemy lines now, in camp with the New York Jets after years of trading insults with them and their fans while in Miami.

“The first few days,” the NFL’s active sacks leader said with a grin, “were a little strange.”

Think watching Brett Favre in a Vikings uniform last season — and maybe this one, too — was just plain weird? How about LaDainian Tomlinson as a member of the Jets, trying to prove he still has plenty left? Several other established players have joined Tomlinson and Taylor in New York, including Santonio Holmes, Antonio Cromartie, Brodney Pool and Mark Brunell.

“I can’t wait to get to training camp in Cortland, when we put the pads on and see those guys out there,” coach Rex Ryan said.

The Jets also have sent a handful of big names packing, including Thomas Jones to the Chiefs, Leon Washington to the Seahawks, Lito Sheppard to the Vikings, and Alan Faneca, Kerry Rhodes and Jay Feely to the Cardinals. This from a team that fell one win short of a Super Bowl appearance last season.

Whatever the reason — the leaguewide uncertainty over a new collective bargaining agreement and the chance of a lockout next year, or teams shying from re-signing aging stars with no salary cap this season — there was plenty of movement by players who have previously been the faces of franchises.

“That’s always a tough balancing act,” Jets general manager Mike Tannenbaum said, “in terms of how you structure contracts, how you make trades, giving players up, picking players up.”

Terrell Owens was one free agent who waited around a while before signing with Cincinnati last week. Although he’s on the downside of his career, Owens might be rejuvenated by the thought of teaming with his buddy, Chad Ochocinco.

“I think to myself: When’s the last time you had two receivers on the same field of this caliber on the same team at the same time?” said an excited Ochocinco. “This is going to be scary.”

And, that’s not even considering the fact the Bengals signed Antonio Bryant a few months earlier.

Cornerbacks around the AFC East also might need to be more concerned about taking on the Dolphins, now that they’ve added Brandon Marshall to boost their mediocre passing game.

“He’ll be a focal point for a defense,” wide receiver Greg Camarillo said. “And that really opens up everything for everybody else.”

“I just feel like it’s a great opportunity to be able to come here,” said Campbell, who was replaced in Washington by McNabb, “to a young team that’s going to continue to get better, work each and every day. ” McNabb certainly believes he’s in a good spot in Washington, where he’ll guide the offense for new coach Mike Shanahan.

“It’s about winning,” said McNabb, who was traded from one NFC East rival to another in April. “Hopefully I can bring a little bit of a winning attitude over and we can display that on the field.”

McNabb will also have some options lining up behind him, with a crowded backfield that includes incumbent starter Clinton Portis and new signees Larry Johnson and Willie Parker — former Pro Bowl selections.

Speaking of running backs, Tomlinson signed with the Jets with an eye on winning a championship. After nine record-breaking seasons in San Diego, the eighth-leading rusher in NFL history is motivated by those who say he’s merely a shell of the player he once was.

“He’s not satisfied with what he’s done so far,” Ryan said. “I think he realizes that he has many more plays left in him and he’s going to do it for the Jets. We’re excited about that.”

And plenty of teams have a similar sense of optimism for their new additions — and seasons — as they head into training camp.

“What’s in front of us is winning a championship,” Raiders coach Tom Cable said. “That’s the goal now. Let’s go for it.”