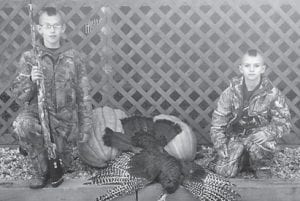 OWEN GIBSON II killed a turkey this shotgun season. He is the son of Owen and Nikki Gibson of Cowan, and grandson of Leonard and Kay Boggs, also of Cowan; Codell and Debbie Gibson of Craft’s Colly, and Carlene and Kenneth Oliver of Columbia. He is pictured with his brother, Kane.