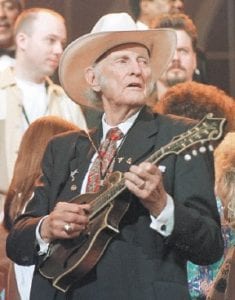 Visitors to the International Bluegrass Music Museum in this western Kentucky city will get a special treat: A look at the 1964 Gibson mandolin that once belonged to bluegrass legend Bill Monroe.

The mandolin is on loan to the museum from the Country Music Hall of Fame in Nashville for the next two years.

Museum board trustee Ross Leazenby told the Messenger- Inquirer that the instrument is the “Holy Grail No. 2.” No. 1 would be Monroe’s famed 1923 F-5 Lloyd Loar mandolin, the instrument he played through most of his career.

“All across the world, this (1964 mandolin) will be a big draw for bluegrass fans,” Leazenby said.

The 1964 Gibson was the mandolin on which Monroe wrote his haunting “My Last Days on Earth” and with which he recorded the song in 1981. It was cross-tuned in a C-sharp minor tuning for the song, said Mick Buck, curatorial director of the Country Music Hall of Fame.

Monroe, he said, donated the 1964 Gibson to the Nashville museum in 1981, not long after he recorded “My Last Days on Earth.”

In 1952, the museum’s website says, Monroe “sent the 1923 mandolin to the Gibson factory with instructions to replace the fingerboard, repair the neck and touch up the finish in several areas.

“After keeping it for several months, the Gibson Company returned it with only the fingerboard replaced. Monroe was so disgusted that he gouged out the Gibson name with a knife, leaving only the word ‘The’ on the headstock.”

In 1980, Monroe and Gibson reconciled and the company took the 1923 mandolin back for a careful reconstruction.

“This is pretty big,” Gabrielle Gray, the bluegrass museum’s executive director, said. “What’s really cool is we have the headstock that he (Monroe gouged) on display along with the instrument he used while it was being repaired.”

The exhibit features a recording of Monroe talking about the incident and the instruments.