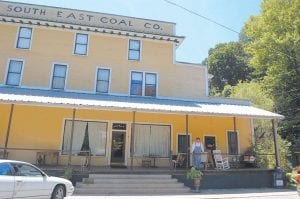 The Seco Company Store, above, suspended its restaurant and bed-andbreakfast operations after unruly neighbors harassed guests and kept delivery trucks from getting to the facility which is located in the old Seco coal camp, said owner Jack Looney.

The Seco Company Store was forced to temporarily close its restaurant and bed-and-breakfast after a group of neighbors began intimidating guests and blocking delivery trucks, the store’s owner says.

Jack Looney, who operates the company store and Highland Winery, told The Mountain Eagle that a group of Seco residents have been harassing guests by firing shots into the air and yelling death threats through windows. He said the neighbors are also blocking trucks from making deliveries to the business in Seco.

Looney said the intimidation forced him to shut down the establishment to the general public until further notice.

The winery’s popular restaurant, housed in an old South East Coal Co. commissary, is now closed and the only lodging available is to the Haliburton Company, a natural gas well servicing company which had already rented out half of the winery’s rooms for the next year.

Highland Winery/Seco Company Store opened in 1997 and started serving alcohol in 2001. Looney and his wife Sandy said they have dedicated more than a decade of their lives to the community, only to have some Seco residents treat them with hostility and disrespect. 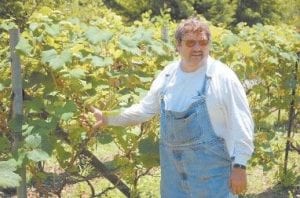 At right, Looney examines grapes used in making wine at the Highland Winery, which is located in the basement of the store.

“They’ve been trying to run us off right from the very beginning,” said Looney. “It’s clear they don’t want us here.”

Looney said two of his neighbors have been interfering with delivery trucks. He said that week after week they have been parking two junked cars in front of their house, preventing the trucks from making the sharp turn required to roll up to the winery’s main building.

“It’s impossible for them to make the deliveries,” said Looney, “So now they’ve cut their losses and refuse to make the runs anymore.”

Looney said he was able to fix the problem for a while by meeting the delivery trucks at Neon Junction and transporting the supplies in his own vehicle. He said that because of so many other work-related responsibilities he is no longer able to do that. The end result — no food and no soft drinks. And that has led to no service at the winery.

“This has really crippled us,” said Looney. “We can’t provide the public with what they want and it’s a shame.”

Letcher County Sheriff Danny Webb said he visited the area recently and ordered two men to remove cars that were blocking the road, one of which did not have a transmission. Webb said the area is now being patrolled frequently.

Looney said he made Letcher County Judge/Executive Jim Ward aware of the delivery problems back in March, then notified Ward again that he was being forced to shut down the restaurant and bedand breakfast at the beginning of July.O

n Monday, Ward followed through on a promise to install “no parking” signs at the location where the street was being blocked.

Meanwhile, Looney remains up in arms over the shots being fired around the houses and cottages on the winery’s property.

“We had a couple from Oregon in here,” said Looney, “and in the middle of the night someone fired shots outside their window and told them they wouldn’t live to see the light of day if they didn’t leave.”

Looney said the couple immediately packed their bags and left.

“We didn’t know what to think,” said Looney, “but when we found out what happened we didn’t blame them.”

Looney said that because of the winery’s location, police aren’t able to answer a complaint soon enough to catch those who are responsible for the intimidation.

“By the time they get here,” said Looney, “it’s way too late and there’s nothing you can do about it.”

Looney suspects that illegal drug activity is connected to the gunfire and several attempted break-ins at his home in Seco’s secluded Number Two Hollow. He said the most recent incident took place Saturday night when a man on a four-wheeler cut through the lock on a gate that separates his property from Barlow Lake, near Neon. Looney said his wife heard the man trying to knock through their back door and ran him off.

The Looneys said they hope business can return to normal, but said there is no way that can happen until the delivery truck problem is solved.

“We don’t want anyone to give up on us,” said Jack Looney. “We’re trying to rise above all this.

Looney said the future of the winery could rest in the hands of the public.

“If they want us to stay open,” said Looney. “They need to contact our county authorities and tell them to do something about it.”