Owners are closing Whitesburg store after being flooded 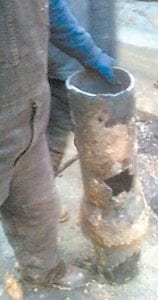 A Whitesburg waterworks employee shows the hole in the pipe that caused Raegan’s Closet to flood on January 25.

A Whitesburg business owner has decided to close her consignment store after a large water distribution pipe burst and flooded the store on Friday afternoon.

Water and mud gushed into Raegan’s Closet while the store was closed Friday because of icy road conditions. Roger Blair, owner of Blair Insurance Agency, was standing across Main Street in front of his business and heard the water. Blair walked across the street, looked down the stairwell and saw the water rising.

He called Jolinda and William Wright, owners of Raegan’s Closet, which is located below StreetSide Grill and Bar, which is owned by their son, Charlie Wright.

Employees with the City of Whitesburg turned off the water.

Water was about knee high in the store, said Jolinda Wright.

William Wright found two drains located in the store and opened the drains to let the water out. The couple came back Saturday morning to access damage.

“Mud was two or three inches deep all the way to the back wall,” said William Wright.

Plastic containers filled with children’s clothes, which had been sitting on the floor, were filled with water and mud.

“ This has been overwhelming to me,” said Jolinda Wright. “I’ve never been in a flood situation before.”

She filled a Dumpster one and a half times with mud-saturated clothes and toys.

“It was other people’s stuff I cared about,” said Jolinda Wright.

Children’s clothes that were hanging up high were not damaged.

“I salvaged a good part of the clothes,” said Jolinda Wright.

Anyone with items in the store that have not been destroyed can come to the store and pick up their items.

“If not, they will continue to be sold,” said Jolinda Wright.

She is also selling display pieces and decorations.

Records have been salvaged and Jolinda Wright said she will pay consignors what she owes them.

Wright opened her shop in September 2010 and named it after her granddaughter.

“I have really enjoyed my little business,” said Jolinda Wright. “It’s been a good community service.”

She said several grandmothers raising grandchildren have purchased many clothes from Jolinda Wright and have told her how they appreciate the shop.

She said people from Harlan, Hindman, Pikeville and other surrounding areas shopped at Raegan’s Closet.

Churches and other organizations also bought items from the store. At the end of a season, Family Resource and Youth Services Center (FRYSC) coordinators would go to Raegan’s Closet and pick out items for students for free.

Sewer backed up into the store on Jan. 2 and Jolinda Wright said it wasn’t as bad as the flood.

“I’ve fought water problems the whole time I have been down here,” said Jolinda Wright. “We’ll close as soon as everything is out of here.”

Whitesburg Mayor James W. Craft said he is sorry that the store flooded.

“We are working with our insurance company to see if there is coverage to replace her merchandise,” said Craft. “We don’t need to lose businesses because of failed infrastructure.”