Owners of Mayking store charged with drug trafficking after search 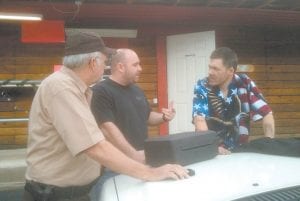 Officers with the Letcher County Sheriff ’s Department arrested the owners of a small Mayking store and charged them with drug trafficking just days after the federal Drug Enforcement Administration (DEA) extended its ban on several chemicals used to make synthetic recreational drugs that are often sold as incense and bath salts.

TFX owners Cheryl Nicole Vandyke, 32, and Mark Anthony Vandyke, 38, both of 70 Slope Drive, Payne Gap, were arrested March 5 and charged with one count each of first-degree trafficking in a controlled substance.

“This is the first time anything like this has been done around here,” said Damron. “It’s really a new fight on the war on drugs. The problem is so big. We are learning as we go.”

Cheryl Vandyke (left) and Mark Vandyke were being held in the Letcher County Jail on drug trafficking charges.

The DEA announced on Feb. 29 that it was extending its emergency ban on chemicals marketed as “herbal incense potpourri” and sold under names such as K2 and Spice. The DEA’s ban also extends to stimulants used in bath salts designed to imitate the effects of cocaine, LSD and methamphetamine.

Letcher County Sheriff Danny Webb said witnesses have told him that people who have bought bath salts at TFX used the substances on the premises and then staggered to their cars.

“It is selling poison,” said Webb. “The packaging says not for human consumption.”

Webb said he has gotten several telephone calls from concerned citizens who have seen users of the fake drugs suffer from severe paranoia. 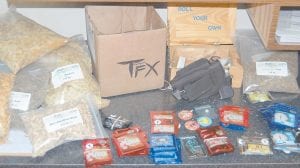 Packages of herbal products and “bath salts” shown in this photo were confiscated after the owners of the TFX store at Mayking and an employee were arrested on drug charges.

“It’s causing people to have to go to the doctor and emergency room,” he said, adding that several cases of domestic violence have also been linked to the use of bath salts.

“It is the cause of people tripping out,” said Damron. “What we do know is it is hurting people. It is causing them to have episodes of dementia.”

The TFX store has been doing business in a building built as a drive-in restaurant and occupied just a year ago as a hot dog stand. In order to do business at the wood frame building, customers have been required to ring a buzzer and exchange money for products through a small window where food was once handed out.

Among the products seized from a TFX employee who was operating the store on Feb. 29 was a bath salt marketed as “Ultimate Sextacy” and described on the label as an “aphrodisiac” intended to be used as a “novelty collector’s item.”

The product is advertised for sale for $29.64 on one Internet site that says it is not available to customers in the U.S. The same website tells users how much Sextacy they should take their first time and advises that the dose “will last for several hours.”

Damron said bath salts can have an effect on users similar to the designer drug ecstacy. He said users of both drugs can experience a state of excited delirium caused by their body temperature elevating to the point it could shut down their organs and kill them. Those experiencing excited delirium often get so warm they feel the need to remove their clothes to cool down, he said.

“If they don’t get medical attention they could very well die from overheating,” said Damron.

As an example of such behavior, Damron mentioned Andrew Allen Michael Toothman, 22, who was found naked and covered in peanut butter and chocolate inside the Neon Food World IGA in February. Damron said police have learned that Toothman ingested bath salts before the incident.

Damron also said he recently got a report about someone in Gordon driving backward down the wrong side of a road after ingesting bath salts.

On Tuesday afternoon, Damron saw two men walking beside US 119 at Ermine waving their arms in the air. Damron said the men, who were “real fidgety and very hyper” admitted “to shooting up bath salts.” Both were arrested and charged with public intoxication.

Webb said the majority of the bath salts are coming to Letcher County through the U.S. Postal System.

“We have learned that substances are being sent from Texas one package after another,” he said, adding that the sheriff ’s department is now working with postal inspectors to address the problem.

“I am going to do everything I can to protect the people of our community,” said Webb. “Law enforcement has to deal with it.”

Damron said TFX manager Keith Maschino, 36, of 2 South Abadoo Street, Neon, admitted to police that he uses bath salts and told officers the synthetic stimulant gives him a high that lasts all day.

While investigating the operating practices of TFX on Feb. 29, Damron watched Maschino get out of a vehicle with a black safety box in his hand. Damron said Maschino saw him and ran to the door of TFX to try to hide the box inside.

Maschino was arrested and charged with possession for sale/transfer simulated controlled substance and second-degree fleeing or evading police. According to an arrest citation, 46 packs of bath salts and two mushrooms were found inside the box.

Maschino was released from the Letcher County Jail on March 3 after posting bail of $10,000 cash. He is scheduled to be arraigned in Letcher District Court at 11 a.m. on March 14.

After Maschino’s arrest, police obtained a warrant to search the Vandyke residence on March 5 and found a large quantity of what are described as synthetic cannabinoids as well as two pipes and a gun.

Kentucky State Police Trooper Donnie White and Sheriff ’s Deputies Matt Gayheart and Jarrod Hipps assisted Damron with executing the search warrant. Damron said the synthetic marijuana that was seized during the search is covered in the ordinance passed recently by the Letcher County Fiscal Court.

Damron said additional charges are pending against the Vandykes. He said information gathered during the investigation will be presented to a grand jury.

“We’re doing everything we can to address the problem,” said Damron.

The Vandykes were being held in the Letcher County Jail. Bonds were set at $25,000 cash.