Owners say shopping center’s closing is ‘beyond our control’ 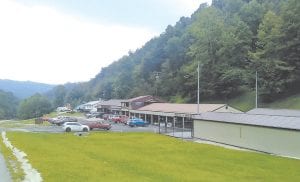 CLOSING DOORS — This shopping center at Isom will be closing as a lawsuit continues over ownership of the property. According to court documents, the Kentucky Highway Department and Letcher County own most of the land because of rights of way for KY 15, which runs in front of the shopping center, and old KY 15 (now Garner Road), which runs behind it. (Photo by Sam Adams)

At least five businesses will either close or find new locations as a result of the closure of a shopping center at Isom.

Robert and Celeste Pugh announced on their Facebook page August 6 that they are closing the shopping center “due to circumstances beyond our control.”

There are at least two businesses in the shopping center that do not belong to the Pughs. Apparently neither of those has a place to move yet.

Rick Pack, owner of J&J Tobacco and Pawn, said he’s owned businesses in Isom for 20 years, and just moved his pawnshop from the other end of the unincorporated town two years. He said he doesn’t know what he’ll do now.

“I don’t have a clue. I really don’t,” Pack said. “This is probably going to bankrupt me.”

Pack, who is from Floyd County, said he doesn’t know when he has to be out of the building and doesn’t know any particulars about why the center is closing. He said he had planned to retire where the store is now, but now has to decide if he can handle another move this soon after the last one.

Dr. Carol Combs-Morris, who runs the Letcher County Outpost Animal Clinic in the shopping center, could not be reached, however a notice posted on the clinic’s Face- book page says the clinic will be closing.

“Over the next month or so, we will be keeping our regular office hours to provide services & medications as long as our supplies last,” Combs-Morris said in the post. “This is a good time to stock up on flea/tick medications, refill prescriptions, to pick up your pets’ medical records and make arrangements with a new provider for their care. For the immediate future I will be working with one of the local rescue groups to provide spay/neuter services for them.”

She wrote that she “would love to find a small location that could be used for periodic wellness clinics (vaccinations, heartworm/fecal testing, deworming, etc.) somewhere in the area between Hindman & Whitesburg. It would have to be very low-rent since we would only be using it a few days a month.”

“We will miss seeing all our friends for the time being, and we just don’t know what the future holds,” the statement says. “There is a small plaque that hangs in the clinic that says ‘The Will of God will never lead you where the Grace of God cannot keep you.’ I fully believe this. Changes mean new opportunities we have not even thought of yet.”

The Pugh family owns P&P Construction, Rob’s Garage, and a selfstorage business, all located in the shopping center. Telephone messages left at P&P and their attorney’s office were not returned.

The shopping center on Garner Mountain has been at the center of a lawsuit filed by the Pughs in 2016 when they learned most of the property they thought they owned is actually owned by the Kentucky Department of Transportation and Letcher County.

The couple built a self-storage center at one end of the shopping center, and soon got a visit from the state highway department informing them they didn’t own the land where they built the buildings.

When the state built KY 15 in the early 1960s, it purchased right-of-way for the road, and after construction of the new highway, it turned the rightof way for what is now Garner Road over to Letcher County. According to court documents, the county owns much of the property on the backside of the shopping center and the state owns most of the property on the front.

Last week, the Pughs announced they were closing the shopping center and would not be collecting rent in August “going forward.”

“We’ve notified all the tenants by mail or in person. This is going to be very time consuming. One that is all of a sudden and no place to go or move our stuff to,” the statement says.

The couple put up a large Christmas light display around their home near the foot of the mountain every year, and said in the statement that closing the center will “jeopardize us doing any kind of Christmas event and the Christmas lights being put up this year, because of the time frame. If there’s any way possible we will be doing the lights. Just wanted to let everyone know ahead of time. I don’t know how long it’s going to take to move everything.”

The statement goes on to say the closing is because of “nothing we’ve done, just things we can’t control. We will be looking to relocate P&P Construction. This just has to do with the property.”

The lawsuit does not involve the couple’s home, and a second statement posted on their public page stressed that point.

“Let me clarify because people won’t pay attention, this has nothing to do with my home. People are making comments about my home and P&P Construction. Please read and pay attention to what I said,” the post says. “I appreciate the concern but it has to do with Garner Mountain property. We are leaving Garner Mountain property due to circumstances beyond our control.”

It was not clear what circumstances necessitated the closing. The suit the Pughs filed in 2016 names Teddy W. and Pat Ratliff of Thornton, from whom they bought the property, First Trust Bank of Hazard, Whitaker Bank, and Community Trust Bank, which had given them loans against the property, Letcher County, and the Commonwealth of Kentucky, claiming that the Ratliffs should have known they didn’t own the property and the banks should have discovered the discrepancy when they checked the title.

There has been no order issued on foreclosure or transfer of title, and no other suits have been filed by or against the Pughs regarding the property. The case is still being argued in Letcher Circuit Court, and is set for motions on September 12.