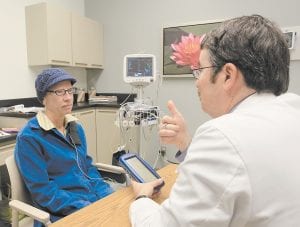 It has the makings of a science fiction movie: Zap someone’s brain with mild jolts of electricity to try to stave off the creeping memory loss of Alzheimer’s disease.

And it’s not easy. Holes are drilled into the patient’s skull so tiny wires can be implanted into just the right spot.

A dramatic shift is beginning in the disappointing struggle to find something to slow the damage of this epidemic: The first U.S. experiments with “brain pacemakers” for Alzheimer’s are getting under way. Scientists are looking beyond drugs to implants in the hunt for much-needed new treatments.

The research is in its infancy. Only a few dozen people with early-stage Alzheimer’s will be implanted in a handful of hospitals. No one knows if it might work, and if it does, how long the effects might last.

Kathy Sanford was among the first to sign up. The Ohio woman’s early stage Alzheimer’s was gradually getting worse. She still lived independently, posting reminders to herself, but no longer could work. The usual medicines weren’t helping.

Then doctors at Ohio State University explained the hope — that constant electrical stimulation of brain circuits involved in memory and thinking might keep those neural networks active for longer, essentially bypassing some of dementia’s damage.

Sanford decided it was worth a shot.

“The reason I’m doing it is, it’s really hard to not be able, sometimes, to remember,” Sanford, 57, said from her Lancaster, Ohio, home.

Her father is blunter.

“What’s our choice? To participate in a program or sit here and watch her slowly deteriorate?” asked Joe Jester, 78. He drives his daughter to follow-up testing, hoping to spot improvement.

A few months after the five-hour operation, the hair shaved for her brain surgery was growing back and Sanford said she felt good, with an occasional tingling that she attributes to the electrodes. A battery powered generator near her collarbone powers them, sending the tiny shocks up her neck and into her brain.

It’s too soon to know how she’ll fare; scientists will track her for two years.

“This is an ongoing evaluation right now that we are optimistic about,” is how Ohio State neurosurgeon Dr. Ali Rezai cautiously puts it.

More than 5 million Americans have Alzheimer’s or similar dementias, and that number is expected to rise rapidly as the baby boomers age. Today’s drugs only temporarily help some symptoms. Attempts to attack Alzheimer’s presumed cause, a brain-clogging gunk, so far haven’t panned out.

“We’re getting tired of not having other things work,” said Ohio State neurologist Dr. Douglas Scharre.

The new approach is called deep brain stimulation, or DBS. While it won’t attack Alzheimer’s root cause either, “maybe we can make the brain work better,” he said.

Between 85,000 and 100,000 people around the world have had DBS to block the tremors of Parkinson’s disease and other movement disorders. The continuous jolts quiet overactive nerve cells, with few side effects. Scientists also are testing whether stimulating other parts of the brain might help lift depression or curb appetite among the obese.

It was in one of those experiments that Canadian researchers back in 2003 stumbled onto the Alzheimer’s possibility. They switched on the electrical jolts in the brain of an obese man and unlocked a flood of old memories. Continuing his DBS also improved his ability to learn. He didn’t have dementia, but the researchers wondered if they could spur memorymaking networks in someone who did.

But wait a minute.

Alzheimer’s doesn’t just steal memories. It eventually robs sufferers of the ability to do the simplest of tasks. How could stimulating a brain so damaged do any good?

A healthy brain is a connected brain. One circuit signals another to switch on and retrieve the memories needed to, say, drive a car or cook a meal.

At least early in the disease, Alzheimer’s kills only certain spots. But the disease’s hallmark gunky plaques act as a roadblock, stopping the “on” switch so that healthy circuits farther away are deactivated, explained Dr. Andres Lozano, a neurosurgeon at Toronto Western Hospital whose research sparked the interest.

So the plan was to put the electrodes into hubs where brain pathways for memory, behavior, concentration and other cognitive functions converge, to see if the jolts reactivate those silenced circuits, added Ohio State’s Rezai.

“It’s like going through Grand Central Station and trying to affect all the trains going in and coming out,” he said.

While most Alzheimer’s patients show clear declines in function every year, one Canadian man who has had the implants for four years hasn’t deteriorated, Lozano said, although he cautioned that there’s no way to know whether that’s due to the DBS.