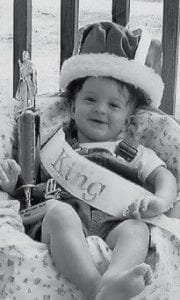 Ashton Gage Ritchie was crowned Mr. Riverside Park in a pageant held August 6 at Jenkins High School. He also won best personality, prettiest eyes, and prettiest smile. He is the son of Jeremy Ritchie and Virginia Potter, both of Neon. His grandparents are Guylene Fannin of Seco, Tony and Melissa Brown of Goose Creek, and Virginia Wilder of Dunham. His great-grandparents are Barbara and Bernard Sparks of Neon.