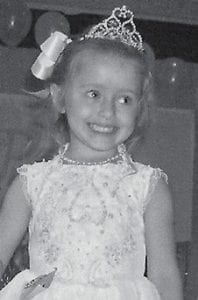 PAGEANT WINNER – Threeyear old Lauren Elizabeth Wash was first runner-up in the Lawrenceburg Fair Pageant and in the Burgoo Fair Pageant. She was the winner and prettiest hair in the Little Princess Pageant in Louisville and first runner-up and most photogenic in the Black Diamond Coal Pageant in Pikeville. She has a scholarship to John Robert Powers Modeling Agency in Louisville, attends Lawrenceburg Preschool, and takes ballet and tap dance classes. She is the daughter of Ben and Adrienne Wash of Lawrenceburg. Her grandparents are Johnny and Lula Caudill of Whitesburg.