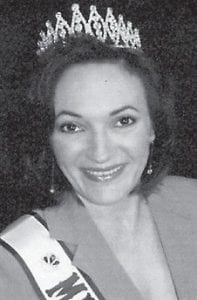 Former Blackey resident Sharon Faye Watts Boltz was named Mrs. St. Cloud International 2008. She will next compete in the Mrs. Minnesota pageant in Minneapolis in March, and was recently named the national spokesperson for the international website of www.voluntermatch.org, a nonprofit organization which promotes volunteerism on the local, statewide, and international levels. The organization connects families in need to non-profit organizations where they can obtain help. Boltz has been a community volunteer for 10 years and enjoys helping others along with her husband, Steve, and their three daughters, Tasha, Tabitha, and Rebecca. She is the daughter of Douglas Watts of Columbus, Ind., and Beulah Faye Watts Dickens of Cornettsville. Her grandparents are the late Troy “Duck” Campbell of Blackey, and Mary Campbell of Beattyville. She has two sisters, Mitzie Walters of Blackey and Shannon Perkins of Lawrenceburg, and a brother, Douglas Todd Watts of Cornettsville.