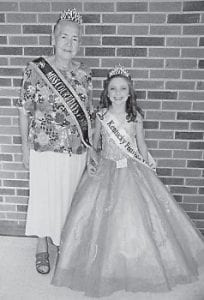 Chloe Rose Wright competed in the Court Days Festival pageant on September 30 in Mount Sterling. She was crowned Kentucky Festivals Pageant Princess and also won Best Dressed and the pageant Centerfold winner. She shared the stage with her grandmother, Rose Adams of Haymond, who was crowned Court Days Festival pageant Grandma Queen. Wright is the daughter of Mark and Ellena Wright of Kona; the granddaughter of Rose Adams of Haymond, and Jesse and Esther Wright of Jenkins, and the greatgranddaughter of Jewel King of Haymond.