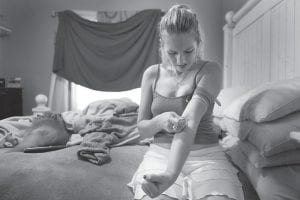 CHEERLEADER TURNS INTO NEEDLE JUNKY — Bree Saghy, 24, injects liquefied oxycodone pills at her Fort Lauderdale, Fla. home. Saghy has been addicted to the painkillers for eight years. Once a cheerleader, Saghy is a stripper who lives with her mom and uses all her money for drugs, which she gets legally from Florida pain clinics. (AP Photo/The Courier-Journal, Kylene Lloyd)

A majority of Kentucky’s illicit pain pills continue to come from Florida, where many doctors indiscriminately dole out prescriptions for oxycodone and Xanax, according to a newspaper report.

Cash-only clinics are still operating throughout Florida, and patients are given prescriptions often after little more than a cursory physical examination or a glance at an old MRI scan, according to an investigation by The Courier- Journal of Louisville.

Kentuckians are making the 17-hour drive to Florida’s Broward County, paying $4 each for 200 or more pills, enough to feed their addiction and sell some on the street.

Bobbie Linkhorn, a former receptionist at a pain clinic in Broward, said Kentuckians were her number one customer.

“They always came in truckloads,” she said.

Local law enforcement and drug-policy officials estimate that 60 percent of Kentucky’s illicit pills come from Florida. And Florida doctors and pharmacies lead the nation as the largest purchasers of the painkiller oxycodone, buying more than 1.1 billion pills in the last two years, according to the U.S. Drug Enforcement Administration.

“If you have money, you walk out with pills,” said Matthew Wilson of Somerset, a recovering addict and former dealer who said he made numerous trips to Florida in 2009 and 2010. “It’s a straight gateway providing people in my part of the country with the means of destruction.”

The newspaper report included interviews with more than 75 people from Kentucky and Florida, including law enforcement and court officials; addicts; political and drug-policy officials.

It found that Florida has 736 registered pain clinics statewide, plus uncounted others owned by certain types of doctors, such as anesthesiologists, that don’t need to be registered. Broward County had only four pain clinics in 2007 but is home to about 100 today.

Florida officials have recently passed new laws that forbid felons from owning clinics, with tighter rules on prescriptions and higher penalties for overprescribing doctors. But anti-drug activists and officials worry they don’t go far enough. They worry that painclinic operators will continue to charge hundreds of dollars in fees to customers or send them to associated pharmacies that may give the clinics a share of the profits.

Florida clinics advertise widely on the Internet, and an alternative newsweekly in Broward and Palm Beach counties contained dozens of ads offering discounts on initial visits, coupons and “specials,” such as free or half-price followups. One clinic’s ad said: “First 10 new patients each day pay only $100 — a $200 savings!”

Police in Hazard say there are neighborhoods in the Appa- lachian city where nearly every other home includes an addict or a dealer, and Deputy Chief Joseph Engle says Florida’s pain clinics are to blame.

“It’s crazy. . I’d say at least 50 percent of the population (of the city) is hooked on prescription drugs,” Engle said.

Rep. Evan Jenne, a Democrat from Fort Lauderdale and minority whip in the Florida House, admitted “we have failed as a legislature” and “abdicated our responsibility.”

“Other people are paying for our legislative laziness. It’s killing people everywhere,” Jenne said. “Every pill that leaves this state then ends up in someone else’s mouth or pocket, it’s our fault.”