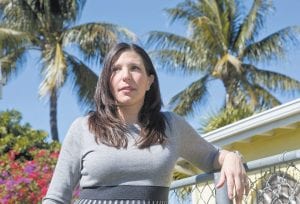 Thousands of travelers to the Caribbean and nearby regions are coming home with an unwanted souvenir: a mosquito-borne virus that recently settled there.

At one New York City hospital, a woman arrived in such agony she had to be admitted just to control her pain. “Thinks she has chicken virus??” the mystifi ed staff wrote on the medical chart after interviewing the patient.

Since it spread from Asia and Africa in late 2013, chikungunya has infected a million people in the Caribbean, Latin America and parts of South America and Mexico. Actress Lindsay Lohan recently said she got it while in French Polynesia.

In the U.S. alone, more than 2,300 travelers since last May have brought home the virus, which has nothing to do with chickens. About a dozen people have gotten it from mosquito bites in Florida.

The virus can cause fever, a rash, headache and joint pain, mostly in the arms and legs, that can lasts for month and in some cases, even years. Symptoms usually start three to seven days after the mosquito bite.

It happened to Marisa Hargrove, who went to a Miami emergency room with joint pain so bad her husband had to help her to the bathroom. A doctor ran tests for common illnesses “and basically called me his mystery case of the day,” she said.

Back home and getting sicker, she searched her symptoms on the Internet and returned to the hospital.

“Is it possible it’s this new chikungunya?” she asked. “The doctor looked at me like I was crazy and said, ‘What the heck is that?’”

A blood test confirmed she had it, and the 42-yearold Miami woman became one of the first Americans to have caught chikungunya from local mosquitoes. State health officials say at least 11 people have been infected in Florida, and they worry the virus will become established there.

Florida is not the only state at risk. The mosquitoes that spread chikungunya live throughout the South, West and Eastern seaboard of the U.S. Local mosquitoes that bite a traveler infected with the virus can pass it on when they bite others.

“We’re very concerned” about travelers because Tennessee has the mosqui- toes and climate to let the disease take hold, Abelardo Moncayo of that state’s Department of Health told an audience at an American Society for Tropical Medicine and Hygiene conference in New Orleans in November.

“Anywhere that’s warm and humid and can sustain mosquitoes year round. So Florida, Texas, any of those Southern states, it could happen,” said Stephen Higgs, a Kansas State University infectious disease expert and an editor of a scientific journal on mosquito-spread diseases.

Outbreaks spread by locally infected mosquitoes have occurred in Italy and France, and one type of mosquito that can carry chikungunya recently was found in the United Kingdom.

“You can’t be reinfected, at least as far as we know,” but there is no vaccine, Higgs said.

There also is little treatment besides medicine for pain.

“It can be very bad and can last for a long time, sometimes even for years,” said Dr. Jacques Simkins, an infectious disease specialist at the University of Miami Miller School of Medicine. He treated Hargrove once her illness was finally diagnosed last July.

“ The symptoms come and go,” she said. “ Even today I still get pains in my ankles, my knees, my fingers but it’s very transient. You never know when it’s going to happen.”

Dr. Mindy Brittner, a doctor at Montefiore Medical Center in New York, treated the 60-year-old woman who stumped the emergency room with her talk of “chicken virus” after returning from visiting the Dominican Republic.

“She came in with fever and terrible muscle and joint pain,” said Brittner, who presented the case at the tropical disease conference.

What to do if you’re heading to the islands or one of the two dozen countries where chikungunya is a risk?

Prevent infection by using bug repellent with plenty of the active ingredient — many experts recommend DEET. Keep arms and legs covered, and be alert for symptoms when you get home. You may have to explain them to your doctor, who may be hearing about the illness for the first time.