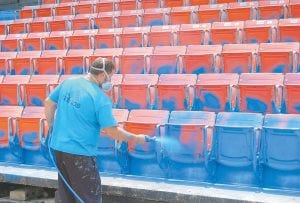 Lewis Brock, owner of Kwik & Rite Painting of Whitesburg, sprayed blue paint on stadium seats at the old Whitesburg High School football field earlier this week. Brock said he spent six days pressure-washing the seats and said it would take three more days to paint them. Brock said after he is finished painting the seats blue, he will paint the trim and steps black. The field is now the home of the Letcher County Central High School soccer teams. The seats were once used in the old Atlanta- Fulton County Stadium in Georgia before Major League Baseball’s Atlanta Braves moved into their current home, Turner Field.