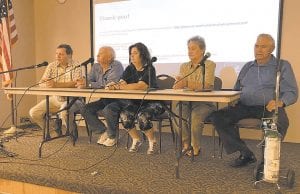 Even as coal production in Central Appalachia has declined, and employment has plummeted, the rates of (pneumoconiosis) black lung disease have not only gone up, but the cases that are being identified are much more severe than in past years when more miners were employed. At Town Hall: The Black Lung Epidemic Sweeping Appalachia, which was held last Thursday at the Letcher County Extension Office, representatives of the Appalachian Citizens Law Center in Whitesburg were joined by an audience of mostly retired coal miners.

The meeting featured a program that was presented by Dr. Cara Halldin, an epidemiologist with the Centers for Disease Control’s National Institute for Occupational Safety and Health (NIOSH), and Dr. Brandon Crum, a physician at the Highland Regional Medical Center Radiology Department, who is a former coal miner and specializes in radiology.

The meeting was held to provide information about increased problems with black lung and to galvanize residents into action by contacting elected officials to help spread the word about how severely black lung has impacted Central Appalachian miners. After a presentation by Dr. Halldin and Dr. Crum, the floor was opened to questions and comments.

According to a news story on West Virginia Public Radio, Dr. Crum is the doctor who first alerted federal researchers to the spike in cases of severe black lung, which has since been confirmed as the largest cluster of the disease ever documented. In that radio piece, the public was urged to contact Kentucky officials and voice their concern about the Kentucky workers’ compensation reform bill, known as House Bill 2, which critics such as Pikeville Attorney Phillip Wheeler said would make it harder for sick miners to get state benefits by restricting the pool of doctors who can determine a miner’s eligibility for state benefits and tilt the process in favor of coal companies.

During the presentation, Crum showed pictures and x-rays of healthy lungs and lungs that had been severely impacted by black lung. He said the most shocking things he has learned in treating miners are the severity of the disease and how much earlier in miners’ careers it impacts victims. Crum referred to one of his patients still in his 30s who can no longer go outside except in dry weather because excess humidity makes it difficult for him to breathe. He said he has a number of men in their 30s who are now on lung transplant lists and “it isn’t slowing down.” Crum added that the first pneumoconiosis-related lung transplant took place in 1996 and the number of transplant recipients is up by a factor of three times in the last ten years. The median life span for the transplant recipients is three to five years and the cut-off date for transplants recipients is 62.

Crum told the gathering that he is not only seeing more complicated cases of black lung, but the frequency has also risen dramatically. He said that in Pike County, there were about 60 cases in 2018 as opposed to about 30 in all of the 1990s. Crum said he has worked on between 1,100 and 1,200 disability cases involving black lung in his clinic. He added that he has seen 98 additional cases (overall) since May 2018 and that 80 percent of the cases have come from Kentucky’s Central Appalachian coalfield counties of Floyd, Letcher, Knott, and Pike.

Dr. Halldin told the group that NIOSH is looking into several lung diseases related to coal mining, including pneumoconiosis, progressive massive fibrosis, silicosis, and mixed dust pneumoconiosis and silicosis. She said the diseases are primarily related to underground coal mining but that incidences involving surface miners are also rising, and that while the number of miners involved in extracting coal has dropped, automation has kept production levels up.

Halldin pointed out that Appalachia coal fueled America’s Industrial Revolution and after it was replaced by electricity in industrial applications, coal played a big role in providing steam for generating electricity. Now, as Appalachian coal mining has declined, Kentucky is still fifth nationally in coal production with Wyoming and West Virginia as the top coal producers. She added that as seams of coal in the Kentucky coalfields have been mined out, the remaining seams are thinner. This means that more rock is taken in the mining process and rock dust is added to coal dust in the air miners breathe.

Halldin said that while black lung is only caused by coal dust, silicosis is caused by rock dust. Dust forms in lung nodules and leads to progressive massive fibrosis, making lungs unable to absorb oxygen. She said there are three stages of black lung disease and in the worst, 3/3, lung x-rays look like there is a snowstorm in the lung.

Halldin said that the 1969 Coal Mine Health and Safety Act was passed in response to the Farmington (West Virginia) mine disaster and miners protested to have black lung recognized in the law. In December 30, 1969, President Richard Nixon signed the Federal Coal Mine Health and Safety Act and under Title IV of the law, miners who were totally disabled by black lung were entitled to benefits for their dependents and survivors.

The CDC NIOSH Coal Workers’ Health Surveillance Program specializes in early detection to prevent early Coal Workers Pneumoconiosis (CWP) from progressing to a disabling disease. Through the program, NIOSH provides health information to miners and compiles disability reports, accident and injury reports, and mortality data. It also works with the Organ Transplant Registry. Halldin said the increase in CWP has resulted in increased deaths and lung transplants and that she is very concerned about the rapid onset and progression of the disease in recent years.

“Black lung among Appalachian coal miners is getting worse than ever before,” said Halldin. She said it had declined until the late 1990s among long term miners, but it has increased since then. It has also increased among surface miners, due primarily to exposure to rock dust. Halldin said one cause is “longer hours and less down time,” the increase in hours per day and days per week worked by miners. This not only means an increase in exposure to dust, but less down time when exposed miners are able to cough the dust up without fresh exposure. The number of claimants for benefits is up since 1996, and the last 20 years have seen overall increases.

Following the physicians’ presentation, several miners in the audience aired complaints and asked question concerning benefits. Several miners attributed the increase to the disease to the increase in hours of work time that was exacerbated by the decline of the UMW in the coal fields. One man also blamed mine inspectors from state and federal agencies for ignoring obvious violations like fresh rock dust that had just been put down in anticipation of the inspectors’ visits. One man said that when inspectors visit, workers at the face (the area where mining is taken place) would be inundated by rock dust and the only protection they had were “little $.25 masks” to filter the air. Others complained that coal operators sometimes interfered with the individual dust sampling devices miners wear to monitor the amount of dust they are exposed to in a period of time.

Retired miners also asked questions about the length of time it takes to qualify for benefits and were told it varies because individual insurance companies often have a say in the process and state and federal laws are in play. John Combs said that because he was an operator, it had taken between 12 and 14 years for him to qualify for benefits. He added that a lot of his former workers are already dead, although he said he had run safe mines and followed ventilation and other safety laws.

“My life expectancy won’t be long,” said Combs. “Black lung is a killer.”

Linda Adams told the crowd that her husband had died five years ago and that now she as a 52-year-old nephew with the disease, adding, “black lung isn’t your grandpa’s disease.”

Patty Amburgey said that although her husband is also dead, she is very concerned that there is a possibility that per-ton royalties that go to black lung benefits will be cut soon. She said she represents the Southeast Kentucky Black Lung Association and it wants to see it increase or at least stay the same, but certainly not go down.

Leonard Fleming, a retired miner who also served as a UMW officer and safety representative, said that in the early 1980s, he had no idea he would be drawing black lung benefits. But now he must put on a breathing apparatus so he can sleep without smothering, and that the one thing most black lung victims have in common is that there are a lot of things they can no longer do.

Dr. Halldin said the most tragic thing about black lung is that it is preventable. An article in “The Conversation,” an independent nonprofit website composed of newsrooms and academic journals, commented on a report in the February 2018 “Journal of the American Medical Association” that said the best way to prevent black lung is to prevent miners from breathing coal dust. Although some methods are subject to debate, preventative measures operators can take is spray water to knock dust out of the air, increase air flow in tunnels to move dust out more quickly, or require miners to wear respirators. However, a 2012 story on National Public Radio stated that federal law does not permit using respirators as a way to control coal dust.

“Mine operators must control the dust first and then they can offer respirators to the miners if they choose to wear them,” says pulmonologist Edward Petsonk, a consultant for the National Institute for Occupational Safety and Health.

Information included in this article was taken from West Virginia Public Broadcasting, the Ohio Valley ReSource, a regional journalism collaborative reporting on economic and social change in Kentucky, Ohio, and West Virginia, the CDC NIOSH website, and The Conversation.