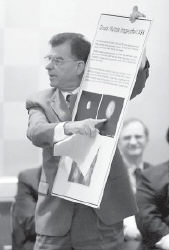 David Shell showed a chart of his vision after having Lasik surgery. (AP Photo)

A panel of medical advisers – mostly eye doctors wearing glasses – were listening to tales of woe and wonder from people who sought to get rid of their specs through Lasik surgery.

What was clear by day’s end: The vast majority of people undergoing laser eye surgery benefit and are happy, but a small fraction, perhaps fewer than 1 percent, suffer serious, lifechanging side effects: worse vision, painful dry eye, glare, inability to drive at night.

Advisers to the Food and Drug Administration heard about a dozen of those stories April 25 – including a father reading his son’s suicide note – and then concluded that today’s warnings for would-be Lasik recipients should be made more clear.

Another lesson: Choose a surgeon carefully.

“This is a referendum on the performance of Lasik by some surgeons who should be doing a better job,” said Dr. Jayne Weiss of Detroit’s Kresge Eye Institute. She chaired the panel.

About 700,000 Americans a year undergo the elective laser surgery. Like golf star and famed Lasik recipient Tiger Woods, they’re hoping to throw away their glasses, just as the ads say.

But about one in four people seeking Lasik is not a good candidate, and the FDA agrees with eye surgeons’ studies that about 5 percent of Lasik recipients wind up unsatisfied. Now the agency is trying to better understand how many of those people are badly harmed, and how many just are unhappy they didn’t get as clear vision as they’d expected.

“Too many Americans have been harmed by this procedure and it’s about time this message was heard,” David Shell of Washington testified, holding up large photographs that he said depict his blurred world, with halos around objects and double vision.

“I see multiple moons,” he said angrily. “Anybody want to have Lasik now?”

Colin Dorrian was in law school when dry eye made his contact lenses so intolerable that he sought Lasik, even though a doctor noted his pupils were pretty large. Both the dry eye and pupil size should have disqualified Dorrian, but he received Lasik anyway – and his father described six years of eye pain and fuzzy vision before the suburban Philadelphia man killed himself last year.

“As soon as my eyes went bad, I fell into a deeper depression than I’d ever experienced, and I couldn’t get out,” Gerard Dorrian read from his son’s suicide note.

Matt Kotsovolos, who worked for the Duke Eye Center when he had a more sophisticated Lasik procedure in 2006, said doctors classify him as a success because he now has 20- 20 vision. But he said, “For the last two years I have suffered debilitating and unremitting eye pain. … Patients do not want to continue to exist as helpless victims with no voice.”

The sober testimonies illustrated that a decade after Lasik hit the market, there still are questions about just how often patients suffer bad outcomes from the $2,000-per-eye procedure.

Meanwhile, FDA’s mostly glasses-wearing advisers recommended adding more clearly worded warnings about the risks to the brochures that every would-be patient is supposed to receive, and to the agency’s Lasik Web site:

– Add photographs that illustrate what people suffering certain side effects actually see, such as the glare that can make oncoming headlights a huge “starburst” of light.

– Make more understandable the conditions that should disqualify someone from Lasik, such as large pupils or severe nearsightedness.

– And spell out that anyone whose nearsightedness is fixed by Lasik is guaranteed to need reading glasses in middle age, something that might not be needed if they skip Lasik.

That’s a big reason why Weiss, the ophthalmologist, won’t get Lasik even though she offers it to her patients.

Lasik is marketed as quick and painless: Doctors cut a flap in the cornea – the eye’s clear covering – aim a laser underneath it and zap to reshape the cornea for sharper sight.

The FDA agrees with eye surgeons’ studies that only about 5 percent of patients are dissatisfied with Lasik. What’s not clear is exactly how many of those suffer lasting severe problems and how many just didn’t get quite as clear vision as they had expected.

The most meticulous studies come from the military, where far less than 1 percent of Lasik recipients suffer serious side effects, said Dr. David Tanzer, the Navy’s Medical Corps commander. That research prompted Lasik to be cleared last year both for Navy aviators and NASA astronauts.

“The word from the guys that are out there standing in harm’s way, whose lives depend on their ability to see, are asking you to please not take this away,” said Lt. Col. Scott Barnes, a cornea specialist at Fort Bragg who described Army troops seeking Lasik after losing their glasses in combat.

No one’s actually considering restrictions on Lasik – but the FDA is pairing with eye surgeons to begin a major study next year to better understand who has bad outcomes.

“Millions of patients have benefited” from Lasik, said Dr. Peter McDonnell of Johns Hopkins University, a spokesman for the American Academy of Ophthalmologists. “No matter how uncommon, when complications occur, they can be distressing. … We’re dedicated to doing everything in our power to make the Lasik procedure even better for all our patients.”